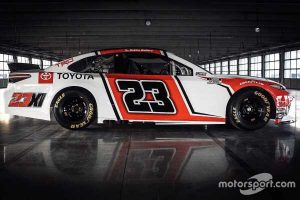 23XI Racing released more details regarding the highly anticipated NASCAR Cup Series team, including its paint scheme for the 2021 season.

The team, formed by NBA legend Michael Jordan alongside three-time Daytona 500 champion Denny Hamlin, will make its debut next February in the 2021 Daytona 500. Bubba Wallace was named as the driver earlier this year.

23XI Racing confirmed Friday that they will run the No. 23 Toyota Camry with support from Toyota Racing Development. They will also benefit from a technical alliance with Joe Gibbs Racing, who Hamlin currently drives for in the Cup Series.

As part of the partnership, TRD will build the team’s engines and provide technology, data and technical assistance. JGR will provide the chassis, as well as other services such as information-sharing to help strengthen both organizations.

“We are excited to be a part of this new team with Michael, Denny and Bubba,” said Ed Laukes, Group Vice President of Toyota Division Marketing at TMNA. “As a Chicago native, I saw firsthand Michael’s determination as he led his team to multiple NBA championships. I know he brings that same drive and work ethic to this new opportunity. Denny has been a valuable part of the Toyota family for over a decade and we are happy to support him as he takes the next step into NASCAR team ownership. We are also thrilled to bring Bubba back to the Toyota family. Bubba achieved many firsts with Toyota, and we are counting on him earning many more victories with 23XI Racing behind the wheel of a Camry.”

JGR team owner Joe Gibbs had this to say of the alliance: “We’re excited to have the opportunity to provide resources to this new Toyota team to help them get started. We can remember being in a similar position nearly three decades ago and we were fortunate to have a similar agreement that helped us in the beginning. We’re happy for Denny to realize his dream of ownership and certainly it’s a big deal for NASCAR to have someone with the respect and stature of Michael Jordan enter our sport.”

Aiming for the top

Jordan has ambitious goals set for the fledgling team, stating his desire “to be competitive for a championship as soon as possible. Our partnership with Toyota and Joe Gibbs Racing gives us the equipment, resources and expertise to do it.”

It would not be entirely unprecedented as the now defunct Furniture Row Racing team quickly grew into championship-winning organization just two years into their partnership with TRD and JGR. However, it will be a steep hill to climb for this all-new race team.

Hamlin has a strong relationship with Toyota. Since they partnered with Gibbs back in 2008, the championship contender has won the manufacturer 41 Cup races. Only Kyle Busch has won more.

“Toyota has been a big part of my NASCAR career,” said Hamlin. “We’ve achieved multiple milestones together including back-to-back Daytona 500 victories. I know how they support their teams, and when I decided move to team ownership, I knew that I wanted Toyota to be alongside our team. Toyota supports my vision with this team and will be integrated with our team members to support us as we grow and strive to achieve race wins and championships.”