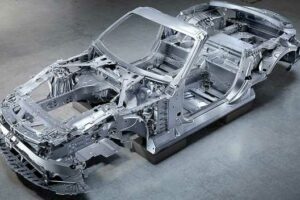 With several new electric Mercedes-Benz models, especially of the sport utility variety, debuting with new names, it’s sometimes easy to forget vehicles with model names that have barely changed in decades. But the Mercedes-AMG SL-Class, which has always had long product cycles and will now be an AMG model exclusively, is about to enter a new generation later this year. Stuttgart is keeping a tight lid on the next-gen model. It replaces an SL-Class that debuted almost 10 years ago and arrived in an automotive landscape that still seems recent but is growing increasingly unrecognizable. And the 2022 model will also arrive in what is a different time in the industry, facing much more diverse competition.

Designing and engineering an all-new SL-Class every 10 years or so sounds more daunting than many other Mercedes models with shorter shelf lives because the SL-Class has to stay competitive and relevant for a much longer time, necessitating a clean sheet design. That’s exactly where Mercedes-AMG engineers began in crafting the new model, starting with a new body shell that will use new materials, all while staying true to the recipe of the line dating back over half a century.

The next-gen SL-Class’ body shell, shown in these photos for the first time, will offer an 18-percent torsional-stiffness gain compared to the outgoing model, as well as transverse rigidity 50 percent higher compared to the AMG GT Roadster thanks to a number of technologies and materials, including new fiber composites. The new body shell will use materials as diverse as magnesium, aluminum, hot-formed steel, and a composite made of glass fibers and carbon, used for a front module cover bridge. 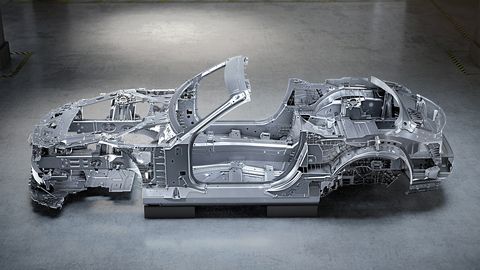 “The development team in our body shell design area was faced with an extremely appealing, but also challenging task: When we were commissioned to undertake the overall development of the new SL, we started from scratch, so to speak, without building on any existing structure. We can be justifiably proud of the result, which proves, once again, the high level of development competence in Affalterbach,” said Jochen Hermann, chief technical officer of Mercedes-AMG GmbH.

A variety of joining methods will also be used in production, including pinch riveting, MIG soldering, laser welding, MIG welding, blind riveting, and use of adhesives.

Meanwhile, cast-aluminum components will be used at the nodal points—the locations where forces come together and are required to be transferred—with Mercedes engineers using variable wall thicknesses in the parts according to the loads encountered. As a result, areas that will need greater rigidity such as at the chassis connections, can feature greater wall thicknesses, while other areas can be thinner, the goal being conserving total weight and lowering the center of gravity.

Speaking of weight, Mercedes says the total weight of the pure body shell without the trunk, hood, and doors will be just 595 pounds, while achieving a 40 percent greater longitudinal rigidity than the AMG GT Roadster.

Another record that Mercedes managed to set with the new SL-Class was the speed of the development process, which took less than three years. The pre-development process alone was done in three months, with a team that at first included just six staff members. Quite a bit of time was shaved thanks to the software being used, permitting series tools to be produced without a physical prototype of the chassis—a step that would not have been possible just a few years ago.

“On the one hand we have managed to reconcile the high package demands, while on the other we have been able to achieve excellent rigidity values in all areas in conjunction with a favorable weight, so providing the basis for agile driving dynamics and exceptional comfort,” Hermann added.

Mercedes-AMG SL-Class prototypes are in their last weeks of testing at the moment but are still wearing camouflage in the manufacturer-released photos. But a few aspects of the new generation can be inferred even without powertrain details at the moment, with Mercedes-AMG expected to offer SL43 and SL53 flavors with inline-six engines underhood. The SL43 is expected to kick things off with about 360 hp, while the SL53 will dial it up to about 430 hp. The range-topper, at least in the early years before more hybrids arrive, is expected to be badged SL63 and is tipped to use a 4.0-liter V8 likely producing north of 600 hp. But the V12 won’t be offered this time around, instead being saved just for the Mercedes-Maybach limos at this point (and not even all of them). The demise of the S-Class convertible, meanwhile, will likely mean that the new SL-Class will be a 2+2.

We’ll see the SL-Class on sale by the end of the year as a 2022 model, if the current timing holds, after an official reveal in just a matter of weeks.

Looking forward to the next SL? Log in to the comments and let us know.