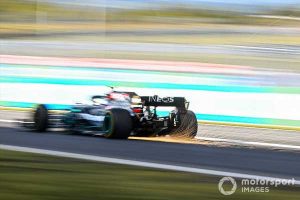 Mercedes’ Valtteri Bottas will start the Eifel Grand Prix from pole position, the 11th round of the 2020 Formula 1 World Championship season, at the Nurburgring.

After yesterday’s total washout, weather conditions were dry and bright – albeit air and track temperatures were colder than at any race weekend this season.

In the top-10 shootout, Bottas set the early benchmark on the first runs at 1m25.812s, fractionally ahead of teammate Lewis Hamilton, but Red Bull’s Max Verstappen then beat him by 0.068s.

Bottas went much faster on his second run, lowering the pole time to 1m25.269s, as Hamilton also jumped ahead of Verstappen to lockout the front row again for Mercedes. Ferrari’s Charles Leclerc qualified fourth, just beating the second Red Bull of Alex Albon in the closing moments of the session.

Renault’s Daniel Ricciardo qualified sixth, ahead of teammate Esteban Ocon. Lando Norris was eighth fastest for McLaren, ahead of Sergio Perez (Racing Point), and the second McLaren of Carlos Sainz.

In Qualifying 2, Mercedes attempted an early medium-tyred run for both of its drivers, which resulted in Hamilton being almost half a second down on early pacesetter Verstappen on softs. Both Mercs ran again on the softs, with Hamilton setting the fastest time of 1m25.390s, which Verstappen got within 0.077s on his second attempt.

Knocked out at this point were Sebastian Vettel (Ferrari), the AlphaTauris of Pierre Gasly and Daniil Kvyat, and Antonio Giovinazzi – who did a great job to not only escape Q1 in his Alfa Romeo but also to outqualify Kevin Magnussen’s Haas.

Falling at the first hurdle were Romain Grosjean (by just 0.020s in his Haas), George Russell (Williams), Kevin Magnussen (Haas), Kimi Raikkonen (Alfa Romeo), Nicholas Latifi (Williams) and Nico Hulkenberg, who only had four push laps after his extremely late call-up to replace the ill Lance Stroll at Racing Point.