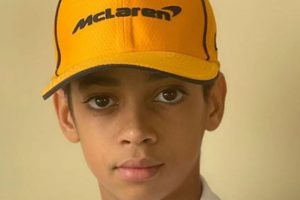 Who is this kid?

If you were looking for someone who represents the ambitions of Formula 1 10 years from now, you would be hard-pressed to find anyone better than 13-year-old Ugo Ugochukwu, a youngster who may one day cause F1 journalists to produce a lot of spelling mistakes.

First and foremost, Ugo is an American, which is a target market for Formula 1 in the years ahead—and a country where F1 has struggled to make an impact, despite the recent success of the Netflix Drive to Survive series.

Now 13, Ugo is the son of Nigerian-born supermodel Oluchi Onweagba-Orlandi and her Italian husband, the fashion designer Luca Orlandi, so he’s an American-Nigerian-Italian.

Both of his parents are well-known in the fashion industry.

His father founded the Luca Luca, high-end women’s fashion brand in New York in 1991, while his mother won the inaugural Nokia Face of Africa competition in 1997, at the age of 17. The prize for this was a three-year contract with the Elite Model Management firm and she soon moved to New York and began appearing in magazines such as Vogue, Maire Claire, Elle, Surface and many others. She did fashion shows for Tommy Hilfiger, Chanel, Gucci, Givenchy, Fendi, Christian Dior, Giorgio Armani, Nina Ricci and ad campaigns for a series of brands, notably Victoria’s Secret and appeared for four years in the Sports Illustrated swimsuit issue. She has since launched her own model agency in Africa called O Model Africa which is dedicated to promoting the next generation of African models. She is also the host and head judge of the show, Africa’s Next Top Model.

Ugo began racing karts in New York at the age of 6 and has since won a series of titles, beginning with the 2014 Micro Rok Championship, the 2017 International Open X30 Mini Championship and the 2018 Challenge of the Americas Rok Junior Championship. This led to him winning the six-round 2020 FIA OKJ European Championship, ahead of Britain’s Arvid Lindblad and Finland’s Tuukka Taponen, although he finished only eighth in the one-off World Championship event at Portimao, which was won by Britain’s Freddie Slater.

The agreement provides McLaren Racing with an option on Ugo’s services in the future, while supporting his development and evolution as he progresses through the junior categories of motorsport.

“Ugo is a promising young talent with strong development prospects,” says Andreas Seidl, McLaren team principal. “While he is still early in his career, it is clear he has the ingredients to be successful in the sport. This signing reflects our refocused approach to identifying and supporting new talent, away from a formal young driver programme to a more tailored basis.”