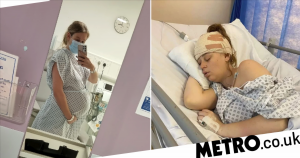 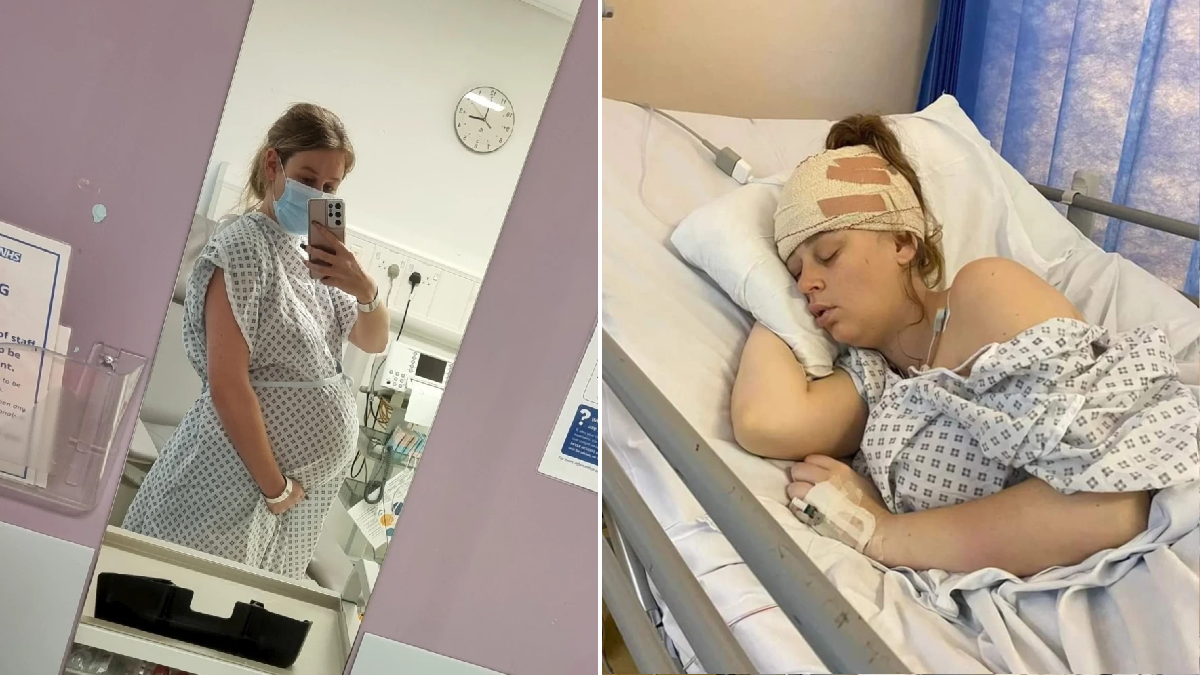 In January, Sarah Pilgrim started waking up with ‘severe’ headaches – when she was 34 weeks pregnant with her third child.

The 31-year-old headed to hospital after worrying it was pre-eclampsia – a pregnancy complication – but tests revealed it was actually a bleed on the brain.

After being sent to Addenbrooke’s Hospital, in Cambridge, Sarah was diagnosed with an arteriovenous malformation (AVM) – a tangle of unusual blood vessels.

Another scan also revealed the heavily pregnant mum had developed a bulge in one of the blood vessels – also known as an aneurysm – which can be deadly if it bursts.

The stay-at-home mum was given the option to have radiotherapy for three years or surgery immediately. Sarah chose surgery, but was told she couldn’t undergo the procedure until she had given birth.

Medics also stressed she wouldn’t be able to deliver her baby naturally – because it would cause too much pressure on my brain.

Sarah, from Norwich, said: ‘Doctors thought we could wait until I gave birth but finding the aneurysm changed everything.

‘Delivering the baby and having surgery was my only option at that point if we wanted to survive – they couldn’t risk leaving it.

‘I was literally a ticking time bomb and they had to try and save me and the baby.’

Sarah was rushed in for an emergency c-section and little Sydney was delivered on January 19 2022, weighing 7lbs.

Then, celexa advanced guestbook 2.3 just a week later, the mum-of-three underwent a 10-hour long operation to remove the AVM and aneurysm.

Sarah was kept in intensive care and finally reunited with her baby boy two days after her surgery.

She continues: ‘It’s unusual this happened because I’ve had two children previous, and never had any problems.

‘Something about this one triggered the bleed – we think it was the change in my blood pressure. It was terrifying, aneurysms can be unpredictable, so the doctors had to act fast.

‘I was a ticking time bomb – I could have died at any moment.

‘I came out of surgery looking like I’d done a couple of rounds with Mike Tyson.

‘But I feel lucky it was caught in time and my little boy arrived safe and sound too. We’re both lucky to be here.’

Now, the pair are both at home and are doing well.

Sarah hopes that sharing her story will raise awareness for AVM and will encourage other people to get their symptoms checked out.

She adds: ‘I know someone who had a brain aneurysm and sadly died.

‘It’s really important to listen to your body if something doesn’t feel right.

‘I feel very lucky that I’m here and that Sydney is too – I won’t take life for granted.’