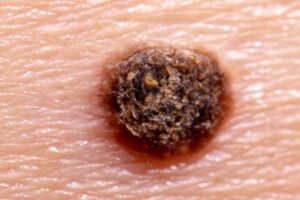 New results from a phase 3 clinical trial may shut the door on the addition of progressive death–1 or PD–ligand 1 inhibitors to the combination of BRAF and MEK inhibitors for the treatment of BRAF V600–mutated melanoma.

The approach seemed promising, given the efficacy of PD-1 and PD-L1 inhibitors in metastatic melanoma, and the relatively short response times to BRAF and MEK inhibitors could potentially be supplemented by longer response times associated with PD-1 and PD-L1 inhibitors. The two categories also have different mechanisms of action and nonoverlapping toxicities, which led to an expectation that the combination would be well tolerated.

But the new study joins two previous randomized, controlled trials that also failed to show much clinical benefit. IMspire150 assigned BRAF V600–mutated melanoma patients to vemurafenib and cobimetinib plus the anti–PD-L1 antibody atezolizumab or placebo. The treatment arm had a small benefit in progression-free survival (hazard ratio, 0.78), which led to Food and Drug Administration approval of the combination, though there was no significant difference when the two cohorts were assessed by an independent review committee. The KEYNOTE-022 trial examined dabrafenib plus trametinib with or without the anti–PD-1 antibody pembrolizumab, and found no difference in investigator-assessed progression free survival.

The new study was published in the Journal of Clinical Oncology. In an accompanying editorial, monoket 20 mg endikasyonlar Margaret K. Callahan, MD, PhD, of Memorial Sloan Kettering Cancer Center, and Paul B. Chapman, MD, of Weill Cornell Medicine, both in New York, speculated that the toxicity of the triplet combination might explain the latest failure, since patients in the triplet arm had more treatment interruptions and dose reductions than the doublet arm (32% received full-dose dabrafenib vs. 54% in the doublet arm), which may have undermined efficacy.

Citing the fact that there are now three randomized, controlled trials with discouraging results, “we believe that there are sufficient data now to be confident that the addition of anti–PD-1 or anti–PD-L1 antibodies to combination RAFi [RAF inhibitors] plus MEKi [MEK inhibitors] is not associated with a significant clinical benefit and should not be studied further in melanoma.

“These results do not support broad use of first-line immunotherapy plus targeted therapy combination, but they provide additional data toward understanding the optimal application of these therapeutic classes in patients with BRAF V600–mutant metastatic melanoma,” the authors of the study wrote.

The study was funded by F Hoffmann–La Roche and Genentech. Callahan has been employed at Bristol-Myers Squibb, Celgene, and Kleo Pharmaceuticals. Callahan has consulted for or advised AstraZeneca, Moderna Therapeutics, Merck, and Immunocore. Chapman has stock or ownership interest in Rgenix; has consulted for or advised Merck, Pfizer, and Black Diamond Therapeutics; and has received research funding from Genentech.