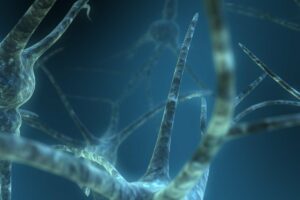 A team of researchers at Karolinska Institutet and Stockholm University in Sweden found that oligodendrocytes, a cell type in the central nervous system known to be targeted in multiple sclerosis (MS), arise in the human brain earlier in development than mainly thought. The findings were published in the journal Developmental Cell.

Oligodendrocytes produce myelin, an insulating layer ensheathing nerve cells, that is under attack in MS. These attacks disrupt information flow in the central nervous system and lead to symptoms such as numbness and walking difficulties, among others.

“In this study, we established that oligodendrocytes are indeed born very early during human development, indicating that this process is conserved during evolution,” says Gonçalo Castelo-Branco, professor at the Department of Medical Biochemistry and Biophysics, Karolinska Institutet, who led the study with collaborators at Karolinska Institutet and Stockholm University.