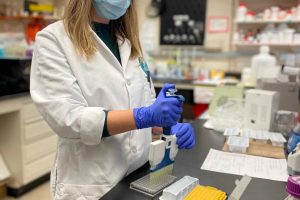 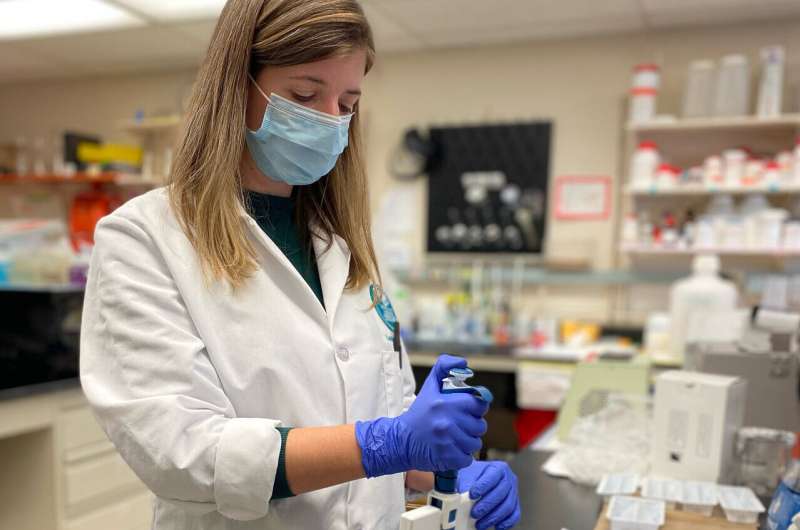 An inexpensive, long-lasting and easy-to-administer vaccine against malaria could be a game-changer for millions of people living in countries where the mosquito-borne disease is endemic.

Lucie Jelinkova, lisinopril buy online a graduate student in the laboratory of Bryce Chackerian, Ph.D., professor in The University of New Mexico Department of Molecular Genetics & Microbiology, has identified a method that could make that dream into reality.

In research recently published in the journal NPJ Vaccines, Jelinkova and colleagues at Johns Hopkins and Flinders University in Australia report that a vaccine based on virus-like particle (VLP) technology showed promise in generating antibodies to prevent the infection.

Their target was Plasmodium falciparum, a parasite that causes a severe form of malaria. It is injected into a host’s blood stream by the Anopheles mosquito and rapidly moves to the liver, where it eventually infects red blood cells.

Existing vaccines either have limited effectiveness or require storage at ultra-cold temperatures, making them impractical for rural and impoverished parts of the world. VLP-based vaccines, the longtime focus of Chackerian’s lab, represent a different approach.

VLPs are essentially viruses that have had most of their genetic material removed, rendering them harmless. The process leaves intact their outer protein coat, which stimulates the immune system to produce antibodies. Chackerian has developed a method for attaching sections of microbial proteins to the VLPs that induce protective antibodies.

In the current study, Jelinkova focused on circumsporozoite protein (better known as CSP), which sits on the surface of the parasite and plays a role in helping it to invade the host’s liver cells, and is the target of an existing vaccine.

She turned to monoclonal antibodies isolated from human volunteers who had been immunized with another experimental vaccine. These antibodies bind to a particularly vulnerable region of the CSP molecule and protect against liver invasion in mouse models of malaria infection.

“That’s where the VLP comes in,” Jelinkova says. “We can take that one little site and decorate the VLP with it and elicit the response that would mimic the action of the monoclonals.”

Jelinkova tested the VLP-based vaccine on mice who had been infected with a cousin of the falciparum parasite and found about 60 percent of the parasites were inhibited. Then, she added an adjuvant—a substance that enhances the effects of a vaccine—and found its effectiveness had grown to more than 90 percent, mimicking the effects of the monoclonal antibodies.

“Ninety percent is great, but it’s not sterilizing immunity,” she says. “We want to find ways to increase the antibody response.” Going forward, she hopes to modify the VLP-based vaccine to recognize neighboring targets on the CSP molecule in hopes of enhancing its protective effects.