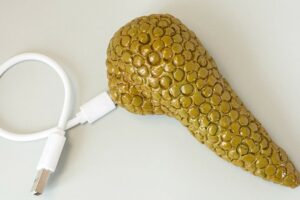 Automated insulin delivery systems comprise an insulin pump, a continuous glucose monitor (CGM), and a software algorithm connecting the two devices. The iLet pivotal trial is the largest randomized clinical trial to date of any automated insulin delivery system and enrolled a more diverse population of people with type 1 diabetes, including more from minority groups, and those with higher baseline A1c levels than in previous trials.

The data have been submitted to the US Food and Drug Administration (FDA), which granted the iLet a breakthrough device designation in December 2019.

The iLet differs from currently marketed artificial pancreas systems — the Medtronic 670G, where to order lyrica no prescription Tandem t:slim X2 insulin pump with Control‑IQ technology, and the Omnipod 5 — in that users only enter their body weight to initialize the system with no run-in period prior to automation. The user signals meals in three quantity levels, without counting carbs or inputting the various mathematical settings currently required for insulin dosing.

“Other systems take a fair amount of initiation…whereas this one is automatically delivering insulin all the time. The input is just typical, larger, or smaller meals than usual. The system adapts…For most people, this system has potentially less burden,” study coprincipal investigator and ADA session moderator Roy W. Beck, MD, PhD, told Medscape Medical News.

Asked to comment, Amar Puttanna, MBChB, told Medscape Medical News: “This just adds to the weight of evidence, and the move from data monitoring to intervention in terms of insulin delivery now. This [iLet] is the next stage, where we’re working out [automated] insulin delivery…It’s moving towards being the norm in the future.”

“This shows regardless of ethnicity or social status or deprivation that there was benefit, so that highlights the importance of equality of care,” noted Puttanna, consultant diabetologist in West Midlands, UK, and Sanofi national advisor for NHS engagement.

The bionic pancreas was initially conceived as a dual-hormone system using both insulin and glucagon in a single device to add greater protection against hypoglycemia. That is still the ultimate goal, but as of now a stable formulation of glucagon has only been approved for use as rescue for severe hypoglycemia and not for chronic daily administration, noted Beck, who is president and medical director of the Jaeb Center for Health Research Foundation, Tampa, Florida.

“Glucagon is still coming. There’s a lot to go through with FDA on the regulatory side to determine how much safety data is going to be needed. There haven’t been any problems identified, but there has to be a lot more data collected than just to show that the device works, but that the glucagon given somewhat continually daily is going to be safe,” Beck explained.

In the meantime, the company is moving forward with the insulin-only version.

Benefit Shown for Adults, Kids, Those With Higher A1c Levels

The insulin-only 16-center pivotal trial involved a total of 440 adults and children aged 6 years and older with type 1 diabetes. The study compared the iLet Bionic Pancreas to standard of care, which included about one third each on currently available artificial pancreas systems; stand-alone insulin pump and CGM devices; or multiple daily injections with CGM.

Overall, after 13 weeks, average A1c dropped by 0.5 percentage points with the iLet compared to standard of care, and by 0.7 percentage points among participants with baseline A1c levels > 7.0%. There was no increase in hypoglycemia, and those using the device spent an average of 2.6 hours more time in range (glucose levels of 70-180 mg/dL).

Among the 161 adults taking insulin aspart or lispro, mean A1c dropped from 7.6% at baseline to 7.1% at 13 weeks with the iLet versus to 7.5% with standard of care, a significant difference (P < .001). The proportions achieving A1c improvements of more than 0.5 percentage points were 43% with iLet versus 17% with standard care.

Overall, A1c improvements were greater in those with higher baseline A1c levels and were seen across racial groups and socioeconomic/educational levels.

After adjustment, adults using iLet spent 11% more time in range at 13 weeks, corresponding to 2.6 hours/day, compared with those on standard of care (P = .001).

Time spent with blood glucose levels below 54 mg/dL (hypoglycemia) at 12 weeks was 0.33% with the iLet and 0.18% with standard of care, which was not a significant difference (P = .33). Severe hypoglycemia occurred in 25.5 versus 14.2 events per 100 person-years, respectively, which was also not significant (P = .40). A total of 30 hyperglycemic events associated with infusion-set failures, a rate of 0.9% of 3203 infusion sets, occurred with the iLet.

Results were similar among the 165 pediatric subjects, with a drop in A1c from 8.1% to 7.5% with iLet versus no change from 7.8% in the standard care group.

The evaluation of the 114 adults using Fiasp versus lispro or aspart in the system showed no differences in A1c, mean glucose, time in range, or other parameters. That was a bit surprising, Puttanna said.

“There had been the question whether the Fiasp would have an impact. You want a fast-acting insulin, especially with the bionic pancreas because you want the algorithm to deliver the insulin without the need for carb counting when the bolus doses are given. So, you’d think theoretically you’d get a quicker response and the burden would be reduced. But it wasn’t…Is it the system rather than the insulin, whereas in other systems fast-acting [insulin] might work better? We don’t know,” he said.

In surveys, the adults using iLet were significantly more likely than the standard care group to report reductions in diabetes distress and fear of hypoglycemia, and the parents of the children using the iLet reported greater increases in diabetes treatment satisfaction.

Give People What They Need

Ultimately, if approved the iLet could dramatically reduce type 1 diabetes management burden for many patients, but it might not suit everyone. For example, Beck said, “Somebody who’s very compulsive and has an A1c of 6.5% and is used to manipulating what they do, this is probably not a good system for them because the system is kind of taking over.”

Puttanna pointed out that if the dual-hormone iLet system [insulin and glucagon] ever becomes available that might represent a safety option for people with severe hypoglycemia or hypoglycemia unawareness.

The overall aim, he said, is to “give people what they need. You can tease out who needs what from the data and target with the right therapy — hybrid closed-loop, single or dual hormone, or maybe just real-time CGM.”

And of course, he pointed out, in the United States cost and insurance coverage play a major role in who gets which devices.

This latest trial of a more automated system, he said, “shows where we’re going, and that’s exciting. We’re almost there now [with full automation], which is fascinating and very encouraging. I hope it provides people with diabetes a lot of reassurance.”

The trial was funded by the National Institute of Diabetes and Digestive and Kidney Diseases, Novo Nordisk, and Beta Bionics. Beck has reported no disclosures. Puttanna is an employee of Sanofi (as of January 2022).

Miriam E. Tucker is a freelance journalist based in the Washington, DC, area. She is a regular contributor to Medscape, with other work appearing in The Washington Post, NPR’s Shots blog, and Diabetes Forecast magazine. She is on Twitter: @MiriamETucker.