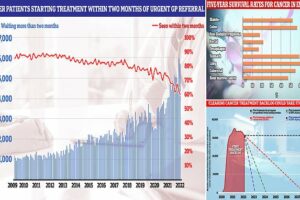 Lockdown hysteria has NHS hurtling towards cancer catastrophe: Expert warns ‘tens of thousands of lives will be lost’ due to delays that are ‘getting worse and worse every day’

Tens of thousands of Britons will die due delayed cancer treatment, as experts warn of devastating cancer crisis that will only get worse.

Cancer care effectively ground to a halt for some patients when the pandemic hit, diazepam 10mg how long in system as specialist doctors were redeployed to treat Covid sufferers and Britons were plunged into lockdown and told to protect the NHS.

More than two years on, official figures show cancer performance is at a record low, with charities warning 30,000 fewer people than expected have started treatment since the start of the Covid crisis.

Professor Pat Price, a leading oncologist, said delays to treatment will cause ‘tens of thousands’ of early deaths.

She said: ‘Referrals are taking too long and when patients do reach hospitals there are biopsies and scans backlogs and more delays to see radiotherapy and surgeons.

‘It’s delays throughout the whole process and it’s getting worse and worse every day.’

The top cancer doctor called for a service overhaul that ditches bureaucracy and gives the NHS cash for more staff and new equipment to treat patients faster.

Professor Price said the two-month target between a GP referral and first cancer treatment should be ‘the extreme not the norm’. However, just six in 10 patients were seen within 62 days by June, the smallest ever number. 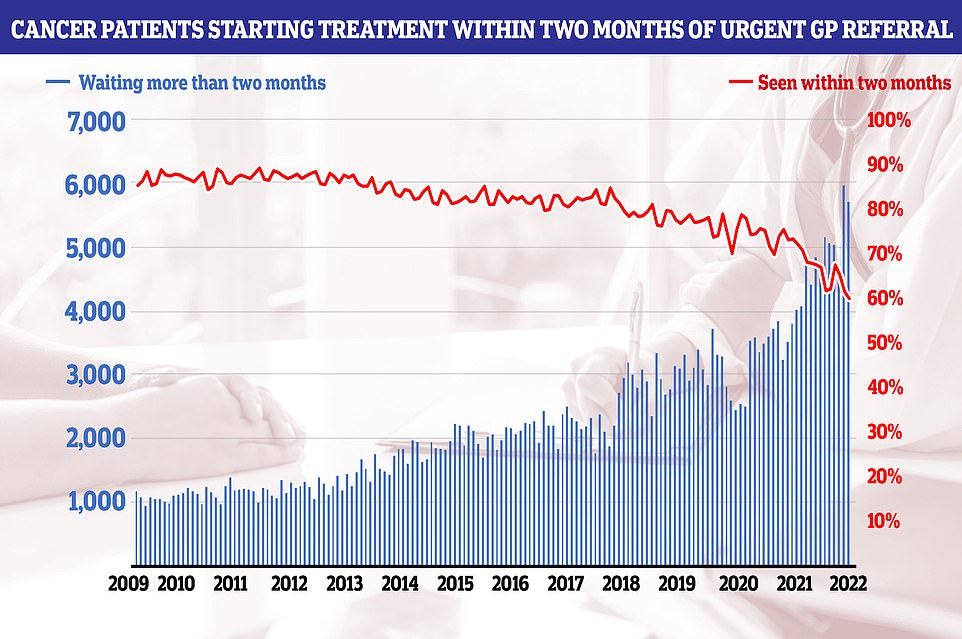 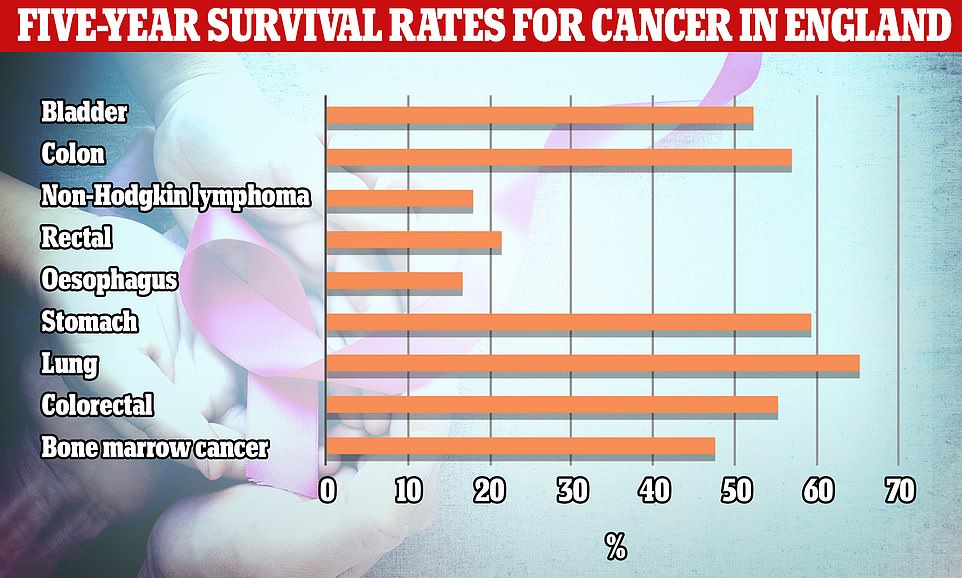 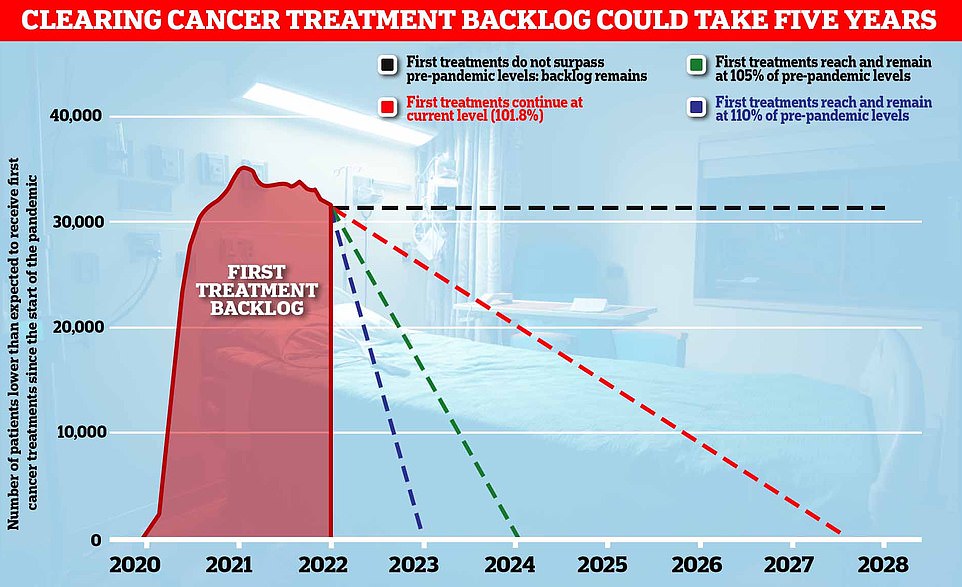 England’s Covid backlog in cancer care is set to last another five years without urgent action, a cancer charity warned. Graph shows: The number of patients fewer than expected to receive first cancer treatment since the start of the pandemic (red line) and how long it will take to reduce to zero if treatments continue at the current pace (dotted red line), increase 5 per cent on pre-pandemic levels (dotted green line) or increase 10 per cent on pre-pandemic levels (dotted blue line)

The overall waiting list jumped to 6.73million in June. This is up from 6.61m in May and is the highest number since records began in August 2007.

There were 3,861 people waiting more than two years to start treatment at the end of June, down from 8,028 in May but still higher than April 2021, when the figure started to be recorded.

The number of people waiting more than a year to start hospital treatment was 355,774, up from 331,623 the previous month and the highest ever logged.

A total of 136,221 people waited at least four hours from the decision to admit to admission in July, down slightly from the all-time high of 136,298 in March.

Just 71 per cent of patients were seen within four hours at A&Es last month, the worst ever performance. NHS standards set out that 95 per cent should be admitted, transferred or discharged within the four-hour window.

The average category one response time – calls from people with life-threatening illnesses or injuries – was nine minutes and 35 seconds. The target time is seven minutes.

Ambulances took an average of 59 minutes and seven seconds to respond to category two calls, such as burns, epilepsy and strokes. This is three times longer than the 18 minute target.

Response times for category three calls – such as late stages of labour, non-severe burns and diabetes – averaged three hours, 17 minutes and six seconds. Ambulances are supposed to arrive to these calls within two hours.

Some 430,037 patients (27.5 per cent) were waiting more than six weeks for a key diagnostic test in June, including an MRI scan, non-obstetric ultrasound or gastroscopy.

Professor Price, who co-founded the #CatchUpWithCancer campaign, told The Telegraph of the cancer crisis facing the NHS that is costing lives.

For every four weeks that a patient’s treatment is delayed, their chance of surviving falls by 10 per cent.

If cancer has spread to another part of the body while patients wait, it may be incurable, meaning surgery, chemotherapy and radiotherapy ineffective.

And patients with this late-stage cancer require more support from the NHS, which reduces its capacity to treat other cancer patients.

Professor Price described the situation as a ‘vicious circle’ warning that ‘tens of thousands of cancer patients will lose their lives prematurely’ because of late diagnosis.

Before the pandemic, England already had one of the lowest cancer survival rates among wealthy nations.

But latest NHS cancer figures paint an even bleaker picture. Just nine in 10 patients (91.8 per cent) started treatment within a month of referral — the worst performance recorded since records began in 2009 and below the 96 per cent target.

Only six in 10 people started their first cancer treatment within two months of an urgent GP referral — another record low and falling short of the 85 per cent threshold set out in the NHS rulebook.

Professor Price explained the structural problems behind the tumbling figures which she warns are still deteriorating — suggesting the situation will only get worse when the NHS releases July and August cancer data.

She said: ‘It’s patients feeling they can’t bother the NHS yet or not being able to get GP appointments.

‘Then, referrals are taking too long and when patients do reach hospitals there are biopsies and scans backlogs and more delays to see radiotherapy and surgeons.

‘It’s delays throughout the whole process and it’s getting worse and worse every day.’

The top cancer doctor said the NHS was clueless to whether there was a cancer backlog in the first nine months of the pandemic.

But by December 2020, it said there had been a ‘sharp reduction’ in the number of people coming forward and being referred for cancer screening and treatment.

The health service admitted cancer patients on its book faced longer waits for diagnosis, while treatment and follow-up care was interrupted or stopped.

It set up a Cancer Recovery Taskforce to review cancer performance and share ‘practical suggestions’ to support its recovery by March 2021. But Professor Price said the the plan had ‘no action points, just hope’.

‘That failed. The next year, we were going to do better and again nothing happened,’ she said.

‘It was only when Sajid Javid became Health Secretary, nearly two years in, that they said, “Oh, there is a problem. Let’s have a war on cancer!” Too late.’

Mr Javid declared a ‘national war on cancer’ in February, which ordered the health service to return cancer care to pre-pandemic levels by March 2023.

But despite the pledge, performance by June had worsened among eight of the 10 key metrics used to measure cancer care.

A report by MPs in spring warned there was a lack of ‘serious effort’ in tackling workforce shortages, which risks reversing survival rates.

And Professor Price hit out at Government plans so far. ‘How are you going to do that [return to pre-pandemic levels by March 2023] if you don’t do anything? I think now it’s just got too difficult for them to deal with,’ she said.

The NHS backlog for routine hospital treatment is at a record high of 6.7million — meaning one in eight people in England are now stuck in the queue for procedures such as hip and knee replacements.

While all backlogs can reduce patients quality of life and cause their health to deteriorate, queues for cancer diagnoses and treatment are ‘the most deadly backlog and the most time-critical’, she said.

She called for a national focus on cancer care and wrote, along with 34 other oncologists, to the Prime Minister earlier this year to develop a new cancer plan to deliver ‘world-class’ care for all Britons.

Professor Price said the crisis will only be solved if the NHS is given permission to ‘do whatever is necessary’.

She said: ‘You cast away our bureaucracy. You use the data, you get every single best breading on it.

‘You get radiotherapy centres equipped properly, put the machines in the diagnostic hubs, get staff in, empower the front line, get surgery into the cancer hubs.

‘You make sure the 62-day target [between urgent GP referral and first cancer treatment] is the extreme not the norm. It can be done, it really can.’