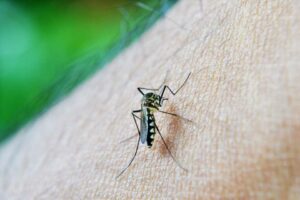 The role of people infected with malaria without showing symptoms presents a hidden risk to efforts to control the disease after they were found to be responsible for most infections in mosquitoes, according to a study published in The Lancet Infectious Diseases.

Researchers from the Infectious Diseases Research Collaboration (IDRC), London School of Hygiene & Tropical Medicine (LSHTM), Radboud university medical center and University of California, San Francisco, found asymptomatic children in the Uganda study were the biggest source of malaria parasites transmitted to mosquitoes. This could provide a new opportunity for control efforts by targeting this infectious reservoir.

Malaria presents a major health threat globally, with 94% of cases on the African continent alone, according to the WHO World Malaria Report 2020. The disease is passed to a human through the bite of an infected female Anopheles mosquito causing infection with the parasite. The predominant and most deadly parasite, lasix for heart failure Plasmodium falciparum, accounts for over 75% of mortality worldwide and is highly prevalent in Uganda.

Malarial parasites depend on a life cycle in which they constantly move back and forth between humans and mosquitoes. Successfully interrupting transmission of the disease can involve clearing parasites from human ‘hosts’ using anti-malaria drugs.

The research team aimed to investigate patterns of malaria infection and understand more about transmission in the area. The study involved two years of regularly testing more than 500 people for evidence of malaria parasites. The genetic make-up of parasites was determined, as well as their ability to infect mosquitoes.

School-aged children aged 5-15 years were responsible for over half (59%) of the infectious reservoir, followed by the under-5s (26%) and people aged 16 years and older (16%). Surprisingly, the researchers found just four children were linked to 60% of the infected mosquitoes studied.

Co-author Dr. John Rek from IDRC said: “These findings are a real eye opener in the fight against malaria. We found that infections in school-aged children drive malaria transmission. Some children harboured billions of malaria parasites in their bloodstream without experiencing symptoms.”

LSHTM co-author Professor Sarah Staedke said: “School-aged children are an important reservoir of malaria parasites that could be easily targeted for control interventions, such as chemoprevention through intermittent preventive treatment.

“This would benefit individual children, may reduce malaria transmission, and could help sustain malaria gains if intense vector control measures are interrupted.”

Understanding transmission among asymptomatic cases is particularly important in areas where malaria control has been successful, but there is a risk that malaria might resurge when control measures are relaxed or withdrawn. Asymptomatic children that keep malaria circulating at relatively low levels could be sufficient to cause infections to quickly rebound if control efforts are not maintained. In other parts of Uganda, when intense malaria control with indoor residual spraying was halted, infections rebounded within weeks.

Principal author Professor Teun Bousema, from Radboud university medical center, said: “Our study demonstrates that even when malaria appears under control, there is a reservoir of infected individuals who can sustain the spread of this deadly disease. Unless their infections are targeted, malaria can quickly return.”

Professor Moses Kamya, IDRC co-author of the study, said: “Only through focused interventions, ideally supplemented by highly sensitive testing, can we target the reservoirs of infection in school-age children.”