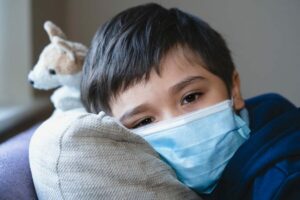 New pediatric COVID-19 cases increased for the third straight week as a substantial number of children under age 5 years started to receive their second doses of the vaccine.

Despite the 3-week trend, however, there are some positive signs. The new-case count for the latest reporting week (July 22-28) was over 95,000, but the 3.9% increase over the previous week’s 92,000 cases is much smaller than that week’s (July 15-21) corresponding jump of almost 22% over the July 8-14 total (75,000), show me images of xanax according to the American Academy of Pediatrics and the Children’s Hospital Association. 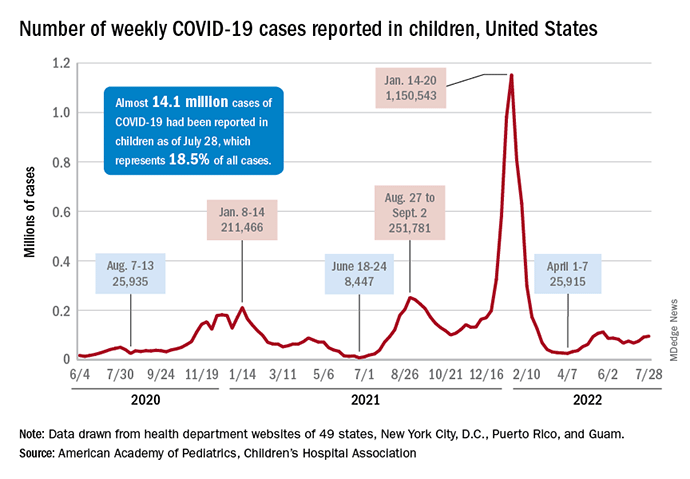 On the not-so-positive side is the trend in admissions among children aged 0-17 years, which continue to climb steadily and have nearly equaled the highest rate seen during the Delta surge in 2021. The rate on July 29 was 0.46 admissions per 100,000 population, and the highest rate over the course of the Delta surge was 0.47 per 100,000, but the all-time high from the Omicron surge – 1.25 per 100,000 in mid-January – is still a long way off, based on data from the Centers for Disease Control and Prevention.

A similar situation is occurring with emergency department visits, but there is differentiation by age group. Among those aged 0-11 years, visits with diagnosed COVID made up 6.5% of all their ED visits on July 25, which was well above the high (4.0%) during the Delta surge, the CDC said.

That is not the case, however, for the older children, for whom rates are rising more slowly. Those aged 12-15 have reached 3.4% so far this summer, as have the 16- to 17-years-olds, versus Delta highs last year of around 7%, the CDC said on its COVID Data Tracker. As with admissions, though, current rates are well below the all-time Omicron high points, the CDC data show.

Joining the ranks of the Fully Vaccinated

Over the last 2 weeks, the first children to receive the COVID vaccine after its approval for those under age 5 years have been coming back for their second doses. Almost 50,000, about 0.3% of all those in that age group, had done so by July 27. Just over 662,000, about 3.4% of the total under-5 population, have received at least one dose, the CDC said.

Meanwhile, analysis of “data from the first several weeks following availability of the vaccine in this age group indicate high variability across states,” the AAP said in its weekly vaccination report. In the District of Columbia, 20.7% of all children under age 5 have received an initial dose as of July 27, as have 15.5% of those in Vermont and 12.5% in Massachusetts. No other state was above 10%, but Mississippi, at 0.7%, was the only one below 1%.

The older children, obviously, have a head start, so their numbers are much higher. At the state level, Vermont has the highest initial dose rate, 69%, for those aged 5-11 years, while Alabama, Mississippi, and Wyoming, at 17%, are looking up at everyone else in the country. Among children aged 12-17 years, D.C. is the highest with 100% vaccination – Massachusetts and Rhode Island are at 98% – and Wyoming is the lowest with 40%, the AAP said.