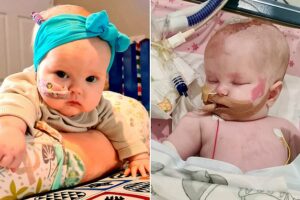 A three-month-old girl with an undiagnosed brain tumour was left hours from death after bungling doctors dismissed her worrying symptoms as ‘normal’.

Molly Mai Wardle-Hampton was born on November 7, healthy and weighing 7lbs, buy trental no prescription but began suffering from seizures from three-weeks-old.

Her worried mother, Corinne Wardle, 37, took daughter to two GP appointments over the following weeks but Molly’s symptoms were dismissed by doctors as ‘normal baby stuff’.

Ms Wardle, who lives in Flint, North Wales, rushed Molly to A&E last month due to her swollen head and was immediately referred to Alder Hey Children’s Hospital, where doctors discovered a tumour in her brain.

Doctors told Ms Wardle that fluid was putting pressure on Molly’s brain and eyes and she would die within 24 hours if they did not operate on her immediately.

Molly underwent a gruelling three-hour operation to have the tumour removed which had spread to three-quarters of her brain.

She has since been diagnosed with ependymoma — a rare and aggressive cancer affecting the brain and spine. Less than 50 children in the UK and around 200 in the US develop the rare condition every year.

Molly has since returned home but is receiving chemotherapy twice a week for the next year in a bid to kill off the remaining tumour and stop it spreading. 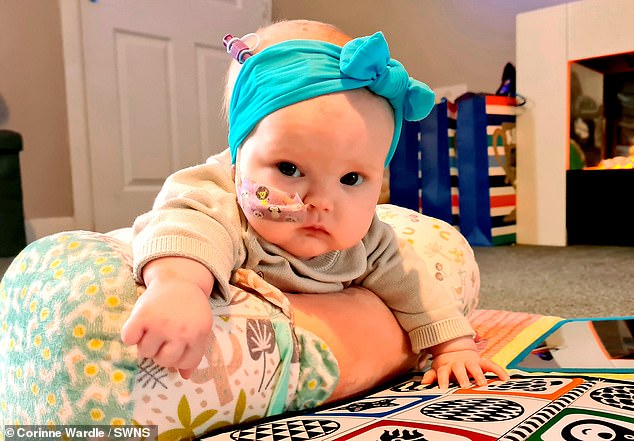 Molly Mai Wardle-Hampton (pictured) was born on November 7, healthy and weighing 7lbs, but began suffering from seizures from three-weeks-old 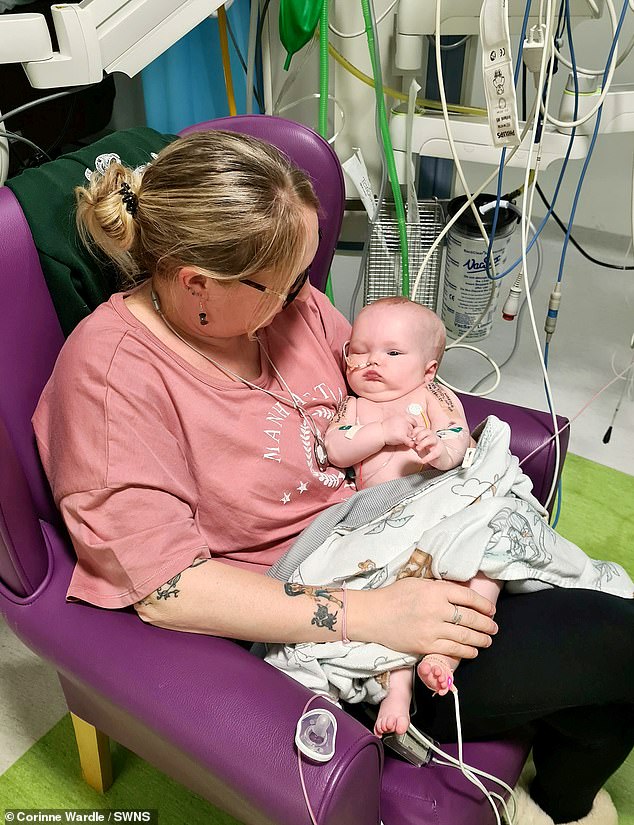 An ependymoma is a tumour that can develop anywhere in the brain or spine.

The growth can spread to the spinal cord via the cerebrospinal fluid.

Less than 50 children in the UK and 200 in the US develop the condition every year.

Around six in 10 children diagnosed with ependymoma survive for five years or more.

Around six in 10 children diagnosed with the tumour type are less than five years old.

Common symptoms of the cancer include nausea, vomiting, lethargy and irritability.

Older children may also struggle with handwriting, experience a gradual decline in their school performance or have an altered way of walking.

Eoendymoma is diagnosed through CT and MRI scans.

Children then usually undergo surgery to remove as much of the tumour as possible. If not all of the tumour is removed, patients usually receive radiotherapy or chemotherapy.

Ms Wardle said Molly had three seizures around the time she was three-weeks-old.

She took Molly to a GP appointment, but was told the symptoms were normal and to keep an eye on her condition.

But over the following weeks, Ms Wardle noticed Molly could only look to her right, had a large head, was vomiting and unsettled.

Her mother took her daughter to her GP again but said she was told there was nothing to worry about.

Over the following weeks, Molly’s symptoms continued to worsen.

Her eyes were going in opposite directions and her head size ‘had now gone off the chart’, her mother said.

On February 1, Ms Wardle rushed Molly to the A&E department at the Countess of Chester Hospital where she works.

Medics there conducted a CT scan and spotted a large brain mass that was covered in fluid, which was pushing on her eye nerves.

Molly was then rushed in an ambulance to Alder Hey Children’s Hospital for further scans.

The following day, doctors conducted a three-hour operation to remove the tumour, which had spread to three-quarters of her brain.

Ms Wardle said: ‘The surgeon at Alder Hey was very clear that she wouldn’t have survived 24 hours without surgery, it was that close.

‘I think in that moment I just went numb, I don’t think I’ve processed it properly yet, we’re still in shock.

‘You just never expect that it’s going to happen to you.’

Molly has since returned home but is undergoing twice-weekly rounds of chemotherapy in a bid to kill off the remaining tumour and stop it spreading.

Ms Wardle said: ‘We were quite lucky she is a baby because the skull is not fused, so the skull could expand with the fluid.

‘If she had been an adult, she would have ended up with severe brain damage or it probably would have killed her.

‘The tumour covered three different parts of the brain. It covered a hefty part of the right hemisphere.

‘My partner keeps saying to me now, “if you hadn’t kept pushing, she’d be dead by now,” which is so scary.’ 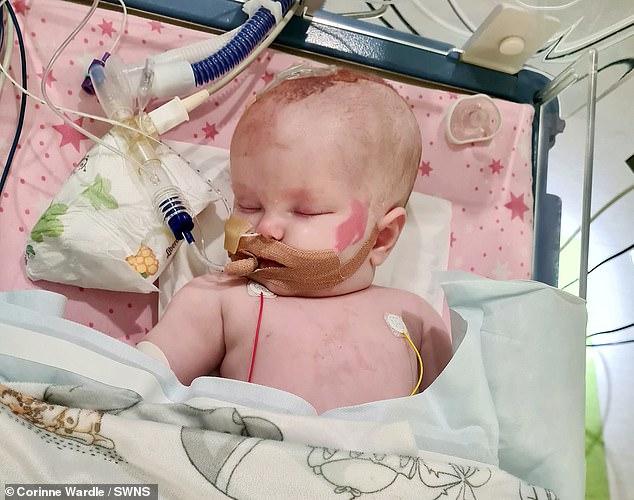 Ms Wardle rushed Molly to A&E last month due to her swollen head and was immediately referred to Alder Hey Children’s Hospital, where doctors discovered a tumour in the three-month-old’s brain 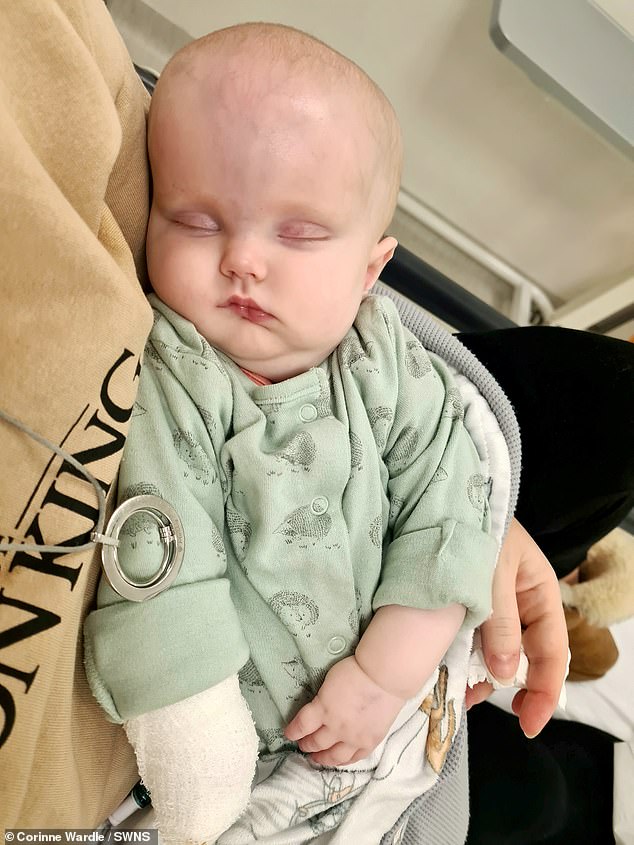 The mother-of-three said: ‘It was very frustrating because I knew something wasn’t right but I kept being told by the doctors that it was normal baby stuff. It was missed by many of them.’

‘She’s only 14 weeks now and we’ve got a whole year of chemotherapy to come.

‘She’s obviously going to get really poorly and because she’s a baby and I can’t explain why this is happening.

‘She can’t tell me that her tummy hurts, or that her skins itchy and feeling horrible.

‘She’s going to be in absolute agony.’

A fundraising page set up to support the family has raised more than £1,600.