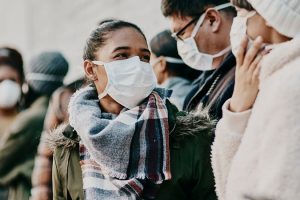 Do your patients think that getting COVID-19 is fully protective against subsequent reinfection? Tell it to the Marines.

A study of U.S. Marine recruits on their way to boot camp at Parris Island, S.C., showed that those who were seropositive at baseline, indicating prior exposure to SARS-CoV-2, remained at some risk for reinfection. They had about one-fifth the risk of subsequent infection, compared with seronegative recruits during basic training, but reinfections did occur.

The study, by Stuart C. Sealfon, MD, diflucan for yeast infection how long to work of Icahn School of Medicine at Mount Sinai in New York, and colleagues, was published in The Lancet Respiratory Medicine.

“Although antibodies induced by initial infection are largely protective, they do not guarantee effective SARS-CoV-2 neutralization activity or immunity against subsequent infection,” they wrote.

An infectious disease specialist who was not involved in the study said that the findings provide further evidence about the level of immunity acquired after an infection.

“It’s quite clear that reinfections do occur, they are of public health importance, and they’re something we need to be mindful of in terms of advising patients about whether a prior infection protects them from reinfection,” Mark Siedner, MD, MPH, a clinician and researcher in the division of infectious diseases at Massachusetts General Hospital, Boston, said in an interview.

The study results reinforce that “not all antibodies are the same,” said Sachin Gupta, MD, an attending physician in pulmonary and critical care medicine at Alameda Health System in Oakland, Calif. “We’re seeing still that 10% of folks who have antibodies can get infected again,” he said in an interview.

CHARM included U.S. Marine recruits, most of them male, aged 18-20 years, who were instructed to follow a 2-week unsupervised quarantine at home, after which they reported to a Marine-supervised facility for an additional 2-week quarantine.

At baseline, participants were tested for SARS-CoV-2 immunoglobulin G (IgG) seropositivity, defined as a dilution of 1:150 or more on receptor-binding domain and full-length spike protein enzyme-linked immunosorbent assay (ELISA).

The recruits filled out questionnaires asking them to report any of 14 specific COVID-19–related symptoms or any other unspecified symptom, as well as demographic information, risk factors, and a brief medical history.

Investigators tested recruits for SARS-CoV-2 infection by polymerase chain reaction (PCR) assay at weeks 0, 1, and 2 of quarantine, and any who had positive PCR results during quarantine were excluded.

Participants who had three negative swab PCR results during quarantine and a baseline serology test at the beginning of the supervised quarantine period – either seronegative or seropositive – then went on to enjoy their basic training at the Marine Corps Recruit Depot, Parris Island, S.C.

The participants were followed prospectively with PCR tests at weeks 2, 4, and 6 in both the seropositive and seronegative groups, and sera were obtained at the same time.

Full data were available for a total of 189 participants who were seropositive and 2,247 who were seronegative at enrollment.

In all, 19 of 189 seropositive recruits (10%) had at least one PCR test positive for SARS-CoV-2 infection during the 6-week follow-up period. This translated into an incidence of 1.1 cases per person-year.

It appeared that antibodies provided some protection for seropositive recruits, as evidenced by a higher likelihood of infection among those with lower baseline full-length spike protein IgG titers than in those with higher baseline titers (hazard ratio 0.4, P < .001).

Among the seropositive participants who did acquire a second SARS-CoV-2 infection, viral loads in mid-turbinate nasal swabs were about 10-fold lower than in seronegative recruits who acquired infections during follow-up.

“This finding suggests that some reinfected individuals could have a similar capacity to transmit infection as those who are infected for the first time. The rate at which reinfection occurs after vaccines and natural immunity is important for estimating the proportion of the population that needs to be vaccinated to suppress the pandemic,” the investigators wrote.

Baseline neutralizing antibody titers were detected in 45 of the first 54 seropositive recruits who remained PCR negative throughout follow-up, but also in 6 of 19 seropositive participants who became infected during the 6 weeks of observation.

Both Siedner and Gupta agreed with the authors that the risks for reinfection that were observed in young, physically fit people may differ for other populations, such as women (only 10% of seropositive recruits and 8% of seronegative recruits were female), older patients, or those who are immunocompromised.

Given that the adjusted odds ratio for reinfection in this study was nearly identical to that of a recent British study comparing infection rates between seropositive and seronegative health care workers, the risk of reinfection for other young adults and for the general population may be similar, Sealfon and colleagues wrote.

Adding to the challenge of reaching herd immunity is the observation that some patients who have recovered from COVID-19 are skeptical about the need for further protection.

“There are patients who feel like vaccination is of low benefit to them, and I think these are the same people who would be hesitant to get the vaccine anyway,” Gupta said.

Although no vaccine is perfect — the vaccine failure rate from the mRNA-based vaccines from Moderna and Pfizer/BioNTech is about 5% — the protections they afford are unmistakable, Siedner said.

The investigators stated, “Young adults, of whom a high proportion are asymptomatically infected and become seropositive in the absence of known infection, can be an important source of transmission to more vulnerable populations. Evaluating the protection against subsequent SARS-CoV-2 infection conferred by seropositivity in young adults is important for determining the need for vaccinating previously infected individuals in this age group.”

The study was funded by the Defense Health Agency and Defense Advanced Research Projects Agency. Sealfon, Siedner, and Gupta have no conflicts of interest to report. Gupta is a member of the editorial advisory board for this publication.