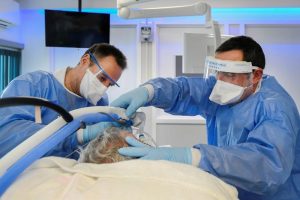 AMSTERDAM (Reuters) – The number of new coronavirus infections in the Netherlands increased by 24% in the week through Tuesday, the biggest weekly jump since mid-December, Dutch health authorities said.

A total 39,527 new cases were confirmed in the country of 17 million people in the past week, taking the total number of COVID-19 patients since the start of the pandemic to almost 1.2 million, with 16,119 related deaths.

Three-quarters of the new cases were caused by a new, more contagious mutation of the virus first discovered in Great Britain, the Dutch Institute for Public Health (RIVM) said.

The RIVM has repeatedly warned about an imminent wave of infections as new mutations come to take the upper hand.

That prompted the government last week to extend a broad lockdown to fight the pandemic, including a night-time curfew that has angered some Dutch citizens, until at least the end of this month.

The government is facing a general election on Tuesday and Wednesday in which Prime Minister Mark Rutte’s conservative VVD Party is expected to gain enough support to secure a fourth term, despite growing criticism of its coronavirus policies.