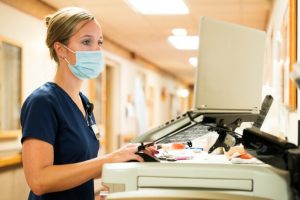 A new report from KLAS Research found that overall customers feel that the health IT vendor community has “responded well” to the COVID-19 crisis.

Among large vendors, Nuance and Epic led the way, with MedAptus, Medigate, Mend and Pelitas ranking highly among those with fewer customers.

“In the spring of 2020, KLAS began collecting provider organizations’ feedback on the response of their software vendors and services firms to the COVID-19 pandemic and how well these companies supported customers throughout the crisis,” according to the report.

“The data in this report … includes ratings from 6,300 in-depth interviews with providers and IT professionals at healthcare organizations,” it explained.

Amidst a rapidly changing landscape, health IT customers have relied on software vendors for a variety of evolving COVID-19 needs.

When KLAS asked customers to rate their vendor on a scale of 1 through 9 about the COVID-19 crisis, abilify and dose three-quarters of those ratings were 8 or higher.

Among vendors with at least 15 ratings for their COVID-19 response in two or more measured market segments, Nuance scored the highest for both overall satisfaction and pandemic behavior. The conversational artificial intelligence vendor was reported to be ready in a variety of ways to help customers, including supporting a mobile, work-from-home workforce and offering some customers free licenses to meet surge needs.

(Interestingly, Microsoft – which announced on Monday that it would be acquiring Nuance – was among the vendors that garnered a sub-8 COVID-19 response rating, coming in at 7.7.)

Two large vendors were rated 7 out of 9 or lower: Homecare Homebase, whose customers said it “made efforts to support them but moved slower than they expected and needed,” and Allscripts.

“While many Allscripts customers report the vendor made significant efforts to support them through the crisis, customers using the Paragon platform or one of Allscripts’ ambulatory solutions are more likely to feel they have been working with thinly stretched resources or doing too much on their own,” said KLAS researchers.

Among vendors that did not perform as well, customers say that they made efforts, but failed to follow through, deliver or communicate effectively.

The vendors with the lowest average rating were eMDs and Siemens, with an average score of 5.6 each.

The report built upon KLAS’ initial findings, released in July, that organizations have turned to a wide range of vendors in the pandemic.

Although telehealth technology was frequently mentioned during that report, many virtual care vendors didn’t score particularly highly in this latest one – and other KLAS reports have found that some struggled to deliver.

Plus, uncertainty around the future of telemedicine may mean shifting health IT needs, especially if federal lawmakers continue to shy away from long-term telehealth policy.

“During the difficult year of 2020, KLAS interviews with healthcare organizations were often filled with stories of vendors supporting their customers by responding quickly and effectively to the COVID-19 crisis,” researchers said.

“Often, vendors strengthened relationships with customers through the crisis by communicating frequently, reacting quickly, predicting customer needs and responding to those needs,” they added.