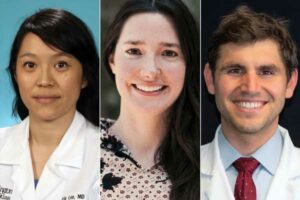 The Division of Physician-Scientists at Washington University School of Medicine in St. Louis has selected three physicians for its third class of Dean’s Scholars. The program offers up to two years of financial support and mentorship to aspiring, MD-only physician-scientists, as well as earmarked time for conducting laboratory research.

Initiated in 2020, the program represents the school’s commitment to address a nationwide shortage of physician-scientists by nurturing the career development of early-career physicians who treat patients but also want to pursue laboratory-based biomedical research.

Physician-scientists are considered crucial to developing new therapeutics and approaches to diagnosing and treating disease. While many physician-scientists hold medical and doctoral degrees, the Dean’s Scholars program aims to strengthen the research skills of those who have earned solely medical degrees.

“Our Dean’s Scholars are excellent clinicians who have shown remarkable aptitude and ambition in basic biomedical research,” said David H. Perlmutter, MD, executive vice chancellor for medical affairs, the George and Carol Bauer Dean of the School of Medicine, and the Spencer T. and Ann W. Olin Distinguished Professor. “We’re delighted to support their talents and help them reach their career goals through this program. Their continued successes reinforce the medical school’s legacy as a leader in molding influential physician-researchers.”

The program is supported with a Physician-Scientist Institutional Award from the Burroughs Wellcome Fund — a nonprofit organization that supports biomedical science through research and education. The School of Medicine and its departments also provide financial support for the program.

The three new Dean’s Scholars underwent a competitive application process that required interviews with senior faculty and presentations of their proposed research projects.

Jacobs is a fourth-year fellow in the Divisions of Hematology & Oncology. Her research will focus on using cytokines — proteins critical in cell signaling — to bolster the ability of immune cells known as natural killer cells to fight cancer. Her mentor is Todd A. Fehniger, MD, PhD, a professor of medicine specializing in oncology, cellular therapy and bone marrow transplant.

Lee, a postdoctoral fellow in the Division of Rheumatology, aims to investigate how complement, an intricate system of proteins that eliminates infectious agents, is involved in the development of autoimmune diseases such as rheumatoid arthritis. Specifically, she will examine how complement alters the function of immune cells such as the B cells. Her mentors are Peggy L. Kendall, MD, head of the Division of Allergy and Immunology, and the Virginia Minnich Professor of Medicine, and Christine Pham, MD, head of the Division of Rheumatology, and the Guy and Ella Mae Magness Professor of Medicine.

Zolkind, an assistant professor in the Department of Otolaryngology — Head & Neck Surgery, will focus on the development of novel therapeutic agents in preclinical models of head and neck cancer. Zolkind is also the head of otolaryngology at the John Cochran Veterans Hospital, which is affiliated with Washington University. His mentor is Ben Major, PhD, the Alan A. and Edith L. Wolff Distinguished Professor of Cell Biology & Physiology.

“A dual MD/PhD degree is not a requirement for being a brilliant physician-scientist,” said Wayne M. Yokoyama, MD, director of the Division of Physician-Scientists, the Sam J. Levin and Audrey Loew Levin Professor of Arthritis Research, and an associate dean. “However, MD-only physician-scientists face unique challenges in their career path. The Dean’s Scholars program is geared toward guiding them toward success.”

Yokoyama himself is internationally recognized for his research on natural killer cells.

Applications for the 2023 Dean’s Scholars program will open this summer.