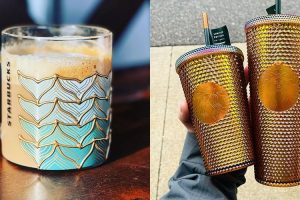 It’s been a busy month for die-hard Starbucks fans! Not only has the coffee giant recently announced that it’s permanently added Oatly’s oat milk to its national menu, but the chain also let some details slip about its 50th anniversary celebration. More specifically, Starbucks is dropping a whole suite of new merchandise that is very limited edition indeed!

As it begins to celebrate its 50th anniversary, Starbucks has released details about a collection that has already begun landing in its cafés and retail locations across the country. The new line has also dropped alongside a special Anniversary Blend that true java nerds will want to get their hands on, but merchandise lovers have likely seen whispers of new mugs and cups made from glass, a rare addition on any Starbucks’ shelf. The company confirmed those rumors by releasing full details about its new Amber Luster Glass Cold Cup and Siren Tails Glass Mug.

One option for hot-java lovers and another for iced-coffee queens, both of these items are priced at $16.95 and have been spotted by social media users in the wild. The cold-coffee cup seemingly resembles many of the studded tumblers that Starbucks fans have gone wild for over the years. The glass mug, however, is quite unique—the raised details on the glass pay homage to the chain’s iconic siren—and it feels like the collector’s item of a lifetime.

That’s not all though—the company has also launched a double-wall ceramic tumbler ($24.95) and a sea-green stainless steel tumbler ($22.95) that also feature beautiful sketches of the Starbucks Siren. If you’re lucky, you may also spot the red terra-cotta siren ceramic mug ($14.95) that is perfect for your hot cup of morning joe.

There’s also seasonal merchandise that is slowly rolling out alongside this limited-edition anniversary collection. Social media users have captured glimpses of a special Earth Day cold cup and a few vibrant florals we’ve never seen before.

Unlike other seasonal drops and collections, it seems that Starbucks is actively pushing out merchandise equally to retail locations—i.e., those inside Target superstores—and its independent café locations. Some regional cafés have been actively posting about the collection on their individual social profiles; checking both retail locations as well as stand-alone locations may be your best bet for finding a limited-edition piece.

If you haven’t found one yet, don’t fret. The chain may be releasing more merchandise as the anniversary celebration continues this year, as it has done with other seasonal collections in the past. And if all else fails, resellers have already posted offerings online for those who can’t live without Starbucks’ beautifully unique glass mug. Happy shopping!