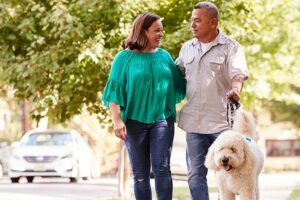 For middle-aged individuals, walking at least 7,000 steps per day may reduce mortality risk up to 70%, symptoms taking too high dosage synthroid based on prospective data from more than 2,000 people.

Findings were consistent regardless of race or sex, and step intensity had no impact on mortality risk, reported lead author Amanda E. Paluch, PhD, of the University of Massachusetts Amherst, and colleagues.

Steps per Day Is Easy to Communicate

Paluch noted that steps per day is a “very appealing metric to quantify activity,” for both researchers and laypeople.

“Steps per day is simple and easy to communicate in public health and clinical settings,” Paluch said in an interview. “Additionally, the dramatic growth of wearable devices measuring steps makes it appealing and broadens the reach of promoting physical activity to many individuals. Walking is an activity that most of the general population can pursue. It can also be accumulated throughout daily living and may seem more achievable to fit into busy lives than a structured exercise session.”

The present investigation was conducted as part of the Coronary Artery Risk Development in Young Adults (CARDIA) Study. The dataset included 2,110 participants ranging from 38-50 years of age, with a mean age of 45.2 years. A slightly higher proportion of the subjects were women (57.1%) and White (57.9%).

All participants wore an ActiGraph 7164 accelerometer for 1 week and were then followed for death of any cause, with a mean follow-up of 10.8 years. Multivariable-adjusted Cox proportional hazards models included a range of covariates, such as smoking history, body weight, alcohol intake, blood pressure, total cholesterol, and others. Step counts were grouped into low (less than 7,000 steps per day), moderate (7,000-9,999), and high (at least 10,000 steps per day) categories.

Walking faster didn’t appear to help either, as stepping intensity was not associated with mortality risk; however, Paluch urged a cautious interpretation of this finding, calling it “inconclusive,” and suggesting that more research is needed.

“It is also important to note that this study only looked at premature all-cause mortality, and therefore the results may be different for other health outcomes, such as the risk of cardiovascular disease, or diabetes, cancer, or mental health outcomes,” Paluch said.

“The results from our study demonstrated that those who are least active have the most to gain,” Paluch said. “Even small incremental increases in steps per day are associated with a lower mortality risk during middle age. A walking plan that gradually works up toward 7,000-10,000 steps per day in middle-aged adults may have health benefits and lower the risk of premature mortality.”

According to Raed A. Joundi, MD, DPhil, of the University of Calgary (Alta.), the study size, diverse population, and length of follow-up should increase confidence in the findings, although a causal relationship remains elusive.

“As this study is observational, causality between step count and mortality cannot be confirmed; however, the authors accounted for many factors, and the association was consistent in different analyses and with prior literature,” Joundi said in an interview. “The authors did not assess the risk of other important events like stroke and heart attack, and these could be addressed in a future study.”

Joundi, who recently published a study linking exercise with a 50% reduction in mortality after stroke, noted that “physical activity has innumerable benefits, and it’s important that people engage in activity that can be regular and consistent, regardless of the type or intensity.”

To this end, he highlighted the use of “devices capable of monitoring step count, which can be an important motivational tool,” and suggested that these findings may bring a sigh of relief to step counters who come up a little short on a common daily goal.

“A target of 10,000 steps is often used for public health promotion, and this study now provides convincing observational evidence that it may be an optimal step count target for mortality reduction,” Joundi said. “However, if 10,000 steps per day is not feasible, 7,000 steps seems to be a very reasonable target given its association with markedly lower mortality in this study.”

Not All Step Counters Are Equal

Unfortunately, such recommendations are complicated by uncertainty in measurement, as widely used step counting devices, like smart watches, may not yield the same results as research-grade accelerometers, according to Nicole L. Spartano, PhD, of Boston University.

“Many comparison studies have been conducted in laboratory settings among young healthy adults, but these do not necessarily reflect real-life wear experiences that will be generalizable to the population as a whole,” Spartano wrote in an accompanying editorial.

She called for large-scale comparison studies to compare research-grade and consumer devices.

“The reason for conducting comparison studies is not to develop distinct guidelines for different devices or subgroups of the population, but rather to understand the variability so that we can develop one clear message that is most appropriate to the public,” Spartano wrote. “Some devices may have bias in terms of step measurement at different activity intensity and may not record steps as accurately in older adults or individuals with obesity or mobility disorders. For example, when adults who were obese wore an ActiGraph monitor in a laboratory setting, the device only recorded 80% of steps walked at a moderate pace, while other devices recorded close to 100% of steps walked. If we in the public health community are to move toward using these devices more for physical activity prescription, these details will need to be explored in more depth.”

CARDIA was conducted and supported by the National Heart, Lung, and Blood Institute in collaboration with the University of Alabama at Birmingham, Northwestern University, the University of Minnesota, and the Kaiser Foundation Research Institute. Some study authors received grants from the National Institutes of Health and the Kaiser Foundation Research Institute. Spartano disclosed relationships with Novo Nordisk, the American Heart Association, the Alzheimer’s Association, and the National Institutes of Health. Joundi and Paluch disclosed no relevant financial relationships.