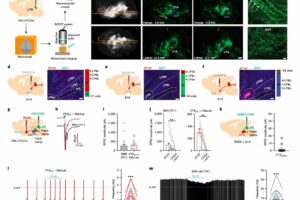 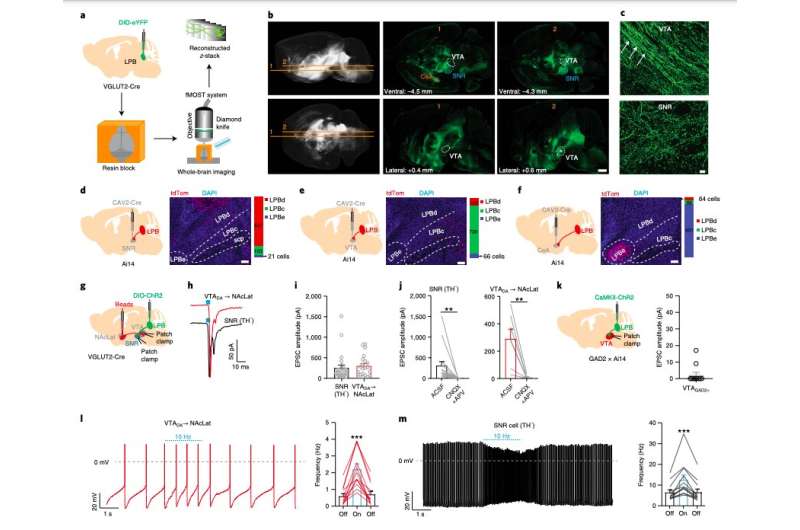 The neurotransmitter dopamine (DA) has several important functions. For instance, it known to play a role in how we feel pleasure, as well as in our ability to concentrate on everyday task, maintain focus, and learn specific behaviors.

Past neuroscience studies have found that the perception of pain decreases dopamine activity in the ventral tegmental area (VTA), a part of the midbrain adjacent to the substantia nigra. The VTA is a key part of the reward system, a network of structures in the brain of humans and other mammals that supports the ability to learn behaviors through rewards.

While research evidence suggests that pain decreases activity of many VTA dopaminergic neurons, the specific neural circuits connecting nociception (i.e., the process through which chronic pain and stress are communicated through the nervous system) with dopaminergic activity is poorly understood.

Researchers at University of California, Berkeley (UC Berkeley) and Huazhong University of Science and Technology in China have recently carried out a study investigating the neural circuitry involved in the perception of pain and stress. Their findings, published in Nature Neuroscience, could aid the current understanding of how pain influences the acquisition of behavioral patterns in both humans and other animals.

To conduct their investigation, the team at UC Berkeley carried out a series of experiments on adult mice. They used different techniques, namely anterograde adeno-associated virus (AAV) tracing and fluorescence micro-optical sectioning tomography (fMOST) and combined the results with images of the full brain of adult mice.

Subsequently, the researchers also performed retrograde tracing of the substantia nigra pars reticulata (SNR), a key processing center in the basal ganglia; the ventral tegmental area (VTA), an area adjacent to the substantia nigra; and the central nucleus of the amygdala (CeA). They observed that lateral parabrachial (LPB) neurons projecting onto these structures are anatomically segregated.

“We show that a subpopulation of lateral parabrachial (LPB) neurons is critical for relaying nociceptive signals from the spinal cord to the SNR,” the researchers wrote in their paper.

The experiments carried out by this team of researchers led to interesting and highly valuable observations. Ultimately, the team was able to map out a specific neural circuit that sends pain-related signals to DA neurons.

Their findings could have very important implications for the study of pain, particularly for research exploring its effects on how humans acquire specific behavioral patterns. In the future, this recent study could thus pave the way for further enquiries into the unique spinal-parabrachial-mesencephalic circuit identified by the researchers.