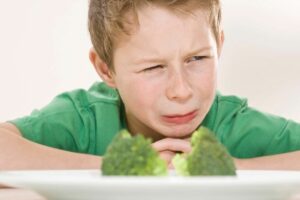 When confronted with the tiniest forkful of cauliflower or broccoli, some kids can’t help but scrunch up their faces in disgust. But don’t blame them — a new study hints that specific enzymes in spit might make cruciferous vegetables taste particularly vile to some children.

These enzymes, called cysteine lyases, are produced by different kinds of bacteria that live in the mouth. The same enzymes are also locked away in the cells of Brassica vegetables, such as cabbage, Brussels sprouts, aborto por cytotec consecuencias broccoli and cauliflower. So when we chomp into a broccoli floret, these enzymes spill out of their storage containers in the veggie’s component cells while those in our spit kick into gear.

These enzymes break down a compound called S-methyl-L-cysteine sulfoxide (SMCSO) in cruciferous vegetables, and this breakdown process transforms the compound into pungent odor molecules. Previous studies of adults suggest that the level of cysteine lyase activity in a person’s spit determines how much the SMCSO breaks down, and therefore, how many stinky molecules get produced in the process. This, in turn, influences how cruciferous veggies taste to adults.

According to these past studies, when different adults consume, say, fresh cabbage, there can be up to a tenfold difference in how many sulfurous odors the food lets off as their saliva-borne enzymes break it to bits. But the study authors wondered whether the same variance can be seen in kids, who, compared with adults, are usually more sensitive to bitter and sour tastes anyway. They suspected that kids whose spit produced the most smelly, SMCSO-derived compounds would show the strongest dislike for Brassica vegetables compared with adults and their peers.

And according to the team’s new study, published Sept. 22 in the Journal of Agricultural and Food Chemistry, that’s just what they found. While both adults’ and kids’ spit produced smelly compounds when exposed to cauliflower, these odors did not sway whether adults liked or disliked the vegetable. On the other hand, kids whose spit produced high concentrations of these odors reported hating cauliflower the most out of all the study subjects.

In particular, kids seemed sensitive to a stinky compound called dimethyl trisulfide (DMTS), an odor that’s both a byproduct of SMCSO-breakdown and a scent that gets released by decomposing meat, first author Damian Frank, a food chemistry and sensory food scientist at the University of Sydney, told Live Science in an email.

“DMTS is okay in small doses, but when dominant, it really has a rotten sulfur smell,” Frank said. And it turns out, when kids tuck into a serving of cauliflower, some might endure higher quantities of these super-smelly odors than others.

The new study included 98 pairs of parents and children ages 6 to 8. After taking samples of each participant’s saliva, the scientists stirred the spit into raw cauliflower powder that they’d concocted in the lab. They measured the SMCSO-derived odor compounds let off by the powdered vegetable, and as in previous studies, they found that each participant’s saliva generated a different quantity of stinky, sulfurous scents.

In a separate analysis, the study authors found that broccoli lets off these same noxious smells, but cauliflower actually did so in slightly higher concentrations.

Interestingly, the degree of putrid odor production was similar between parents’ spit and their children’s, the team found. This finding hints that parents and kids likely carry similar bacteria in their mouths, which would cause them to produce similar levels of cysteine lyase enzymes. “To be clear, we did not measure the microbiological composition of the saliva,” so the team couldn’t confirm exactly how closely parents and children matched each other, or which specific microbes were responsible for the stink, Frank said.

—Science you can eat: 10 things you didn’t know about food

—Beyond vegetables and exercise: 5 surprising ways to be heart healthy

In a taste-test of raw cauliflower, the children whose saliva produced the largest quantities of sulfurous odors reported the strongest dislike of the vegetable. But the same pattern was not seen in adults whose spit also produced a plethora of putrid scents. This suggests that, over time, the adults came to tolerate the taste of cruciferous vegetables, the study authors suggested.

These findings align with past studies of how our tastes change over time. According to Russell Keast, a sensory scientist at Deakin University in Australia, we can come to love foods that we despised as children through repeated exposure. In other words, our taste buds don’t necessarily change; we just slowly learn to enjoy a wider range of foods by eating them more and more.

There may be an evolutionary advantage to kids’ insatiable desire for sugar and natural aversion to bitter broccoli: Sweetness usually signals that a food provides a lot of energy, while bitterness could mean that it’s toxic, Robin Dando, an assistant professor in the Department of Food Sciences in the Department of Agriculture and Life Sciences at Cornell University, told Bon Appétit magazine. And because our senses of taste and smell are strongest in youth, that may make kids even more sensitive to these differences in flavor. But eventually, as they try new foods, children can learn to overcome their aversion to smelly vegetables — regardless of what enzymes they carry on their tongues.

Nicoletta Lanese is a staff writer for Live Science covering health and medicine, along with an assortment of biology, animal, environment and climate stories. She holds degrees in neuroscience and dance from the University of Florida and a graduate certificate in science communication from the University of California, Santa Cruz. Her work has appeared in The Scientist Magazine, Science News, The San Jose Mercury News and Mongabay, among other outlets.