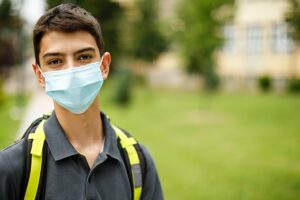 A 50-year-old father of a high school student in Florida was charged with child abuse on Wednesday after officials said he pushed another student and twisted her arm during a dispute over wearing masks in schools, according to NBC News.

Dan Bauman, who has been protesting the mask mandate in Broward County Public Schools, was recording his daughter on his phone as she entered Fort Lauderdale High School without a mask on Wednesday morning, according to the arrest report by the Broward County Sheriff’s Office.

Another student tried to grab his phone and said, “I’ve had enough for four days.” Bauman then pushed her into a fence, grabbed her hand and twisted her arm before a security guard and school resource officer pulled him away.

The school resource officer said he recorded the incident on his body camera, prescription drug lexapro which he turned on because Bauman “is known to cause disruption due to protesting the school board’s mask policy.”

Bauman was charged with a count of aggravated child abuse and booked in the Broward County jail, NBC News reported.

Broward County is one of several school districts in Florida that have defied an order by Gov. Ron DeSantis that bans mask mandates. DeSantis and the state education department have threated to withhold funding for the salaries of superintendents and school board members who vote to implement mask requirements this fall.

On Tuesday, the Broward County school board moved ahead with its mask mandate and said that state law allows school districts to impose dress code requirements, such as masks, to protect students and staff, according to NBC Miami.

“We feel very strongly that we’re using every tool in our toolbox to fulfill our constitutional obligation of providing a safe and healthy school environment for our students,” Rosalind Osgood, the school board chair, told the news outlet.

Bauman protested the school board’s decision and argued for a parent’s right to decide about masks. A school district spokesperson told NBC Miami that officials know of only one other student who has refused to wear a mask among the district’s 260,000 students.

“I don’t care, the school board policy is illegal, and she’s not gonna put on a mask,” Bauman told NBC Miami on Tuesday. “No matter what, it’s not gonna happen.”