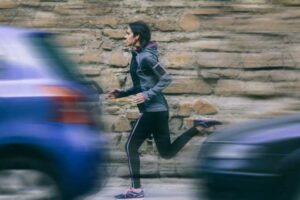 You don’t expect to be hit by a car on your run-commute home but sometimes, the worst case scenario can be the one you’re least prepared for. It can also be a life-changing and life-improving event, as Strong Women editor Miranda Larbi found out.

What’s the worst thing that could happen to you on your run? For some, it’d be falling on their face; for others, it’d be the fear of feeling ill and having to have a Paula Radcliffe moment in the middle of a busy high street. I used to have those paranoid thoughts too but they miraculously disappeared after the actual worst thing did happen to me: being hit by a car.

Two weeks before the Paris Marathon, I was running the eight miles home from work, my backpack full of office clothes and dirty Tupperware. At around the half-way mark, I decided to get off the main road in favour of quieter, less polluted side-roads (this was pre-pandemic rush hour). Seeing a number of cars and motorbikes queuing at the junction lights, I ran across the road about two metres away from the actual crossing and was nearly at the other side when a car hurtled around the corner, online motilium sending me over its bonnet and smashing umpteen bones in my arm as it did so.

“Why running is such a powerful tool for mental health”

I was lucky: my backpack softened the fall and stopped me from hitting my head. The car was going fast enough not to stop at seeing someone in the road but not fast enough to kill, and I’d gone with what seemed at the time to be a ridiculous natural instinct – putting my arm out to “stop” the car. That meant my arm broke but nothing else was harmed (and, obviously, it was my writing hand…).

Needless to say, the driver was forced to take me to A&E by the hoards of cyclists who had gathered to pick me and my bits up. After battling to stop nurses from cutting through my favourite running top (a broken arm < writing off the best bit of kit, amirite?). I had my broken bones pulled apart, my arm wrapped in a cast and was sent on my way. Seven days later, a scan revealed that the bones had slipped back so I had an emergency operation to have pins fixed, after which eight weeks of hand physiotherapy began. So far, so grim. It got grimmer when my consultant told me that I couldn’t weight train for six months and wouldn’t be able to run until there was “absolutely no pain in the arm at all.”

My dreams of cantering down the Champs-Élysées were crushed, as were any hopes of finishing the F45 Challenge I’d been following at the time. A horrible scar now ran down my wrist as a permanent reminder that I wasn’t as invincible as I’d imagined. Maybe it sounds odd then to say that being run over was probably one of the best things to ever happen to me.

Most of us think that the worst thing that can happen to us on a run is going too slow or tripping over – we never imagine that we can be hit by a car or seriously injured.

For the first time in years, I was forced to stop. Not everyone believes in fate but I started to see my accident as the universe’s way of taking away control and the ability to bury my head in exercise instead of tackling issues head on.

Big changes came once my recovery was well under way. Three months after the hit, I quit a job that I hated. My relationship broke down, meaning that I moved out of our hoarder-level flat. I made the decision to live more in the moment and be more adventurous – starting with carving out a new career in a totally new industry and later going travelling. Instead of brutal marathon training and daily HIIT, I began cycling everywhere and taking daily walks and that alone seemed to prompt something huge; my periods came back after a three-year absence.

The only part of my life that felt sticky was running; despite cycling all over London, the thought of getting caught out again on foot terrified me and it was a struggle to go back to running in urban spaces for fear that lightning might strike twice. I’m still hyper-vigilant about traffic and crossing at lights. The accident had felt so random and life changing that I began to realise just how vulnerable runners can be when we’re on the road.

Six months after my accident, I found myself at the start line of another marathon. In the cold, wet and windy highlands, I had the best run of my life – thankful to be alive, to be running and to be part of a community I love so much. I wasn’t the only one there who had gone through recent life changes; I ran five miles with a group of guys celebrating their pal’s decree nisi. We agreed that getting hit by a car and going through a divorce were probably quite similar: both can come out of nowhere and you feel totally flattened by the whole experience. Yet here we were, cantering our way to the finish line and the beer bar at the end.

My running life now has two eras – BTC (Before The Crash) and ATC (After). BTC, I ran a lot, I worked out every day and went from challenge to challenge to keep my mind active and emotions at bay. These days, I run less frequently and usually with my partner; it’s our time for catching up, whether that’s over a 5km or long run. We’re currently training for our first ultramarathon together and that means spending a lot of time running on canals, parks and woodlands rather than busy roads.

Running isn’t something I need to do to keep thoughts at bay anymore (I have a journal for that!), but has become a proper hobby that allows me to get into nature, celebrate my body and catch up with other people. Mad as it may seem, it took being KO-d by a car to realise that.

Calling all runners! Hop over to the Strong Women Training Club where you can join our four-week Strength Training for Runners programme, designed to have you running stronger, longer and faster in no time.