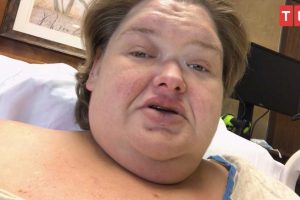 Amy Slaton is reflecting on the birth of her son, and the emotions surrounding his arrival via caesarean section.

In a PEOPLE-exclusive clip from Monday's upcoming episode of 1000-Lb. Sisters, the new mom recalls the "miracle" of welcoming son Gage and the aftermath of the process.

"I just got out of [the] recovery room and Gage is in the nursery because his sugar was 24 — they want it at 50. So they're giving him a little bit of formula, trying to get it up," says Amy from her hospital bed.

She adds in a confessional, "Gage was still in the breech position, where to buy generic zofran online pharmacy without prescription so in the end, I had to have a c-section. And then they took him away to the nursery to get some tests run because he had low blood sugar, 'cause it dropped." 1000-Lb. Sisters' Tammy Slaton Was "Sad and Worried" When She Heard About Amy's Pregnancy

From her hospital bed, Amy reveals that while she hasn't gotten to hold her newborn yet, she "did get to see him."

In her confessional, the TLC star jokes that her baby boy "came out mooning the doctor."

"I ask him if he farted," Amy says, laughing. Amy's pregnancy was a surprise for her sister Tammy, who told PEOPLE last month that she "was feeling all sorts of things."

"I was mad and sad and worried about her health and safety since it was so soon after her [weight-loss] surgery," she added, later saying that, upon reflection, "I'm happy she got pregnant because it was the one thing she most wanted in life."

Tammy said during an episode of the show that month that, regarding her sister's weight gain during her pregnancy, "We're just trying to get her to open her eyes and see that the things she's doing isn't the right choices. … And she could reverse the surgery."