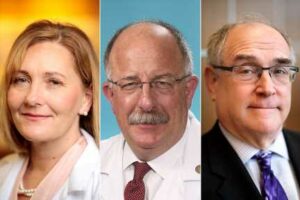 Aagaard will add the title of vice chancellor for medical education to her existing title as the Carol B. and Jerome T. Loeb Professor of Medical Education and senior associate dean for education. Among her most recent accomplishments, she led the development of and launched the new Gateway Curriculum for the School of Medicine, and supported the creation of Washington University’s Academy of Educators, which works to create an environment that promotes and rewards teaching excellence and enhances education. As interim senior administrator for occupational health, she also was critical in helping the School of Medicine navigate through the pandemic.

Aagaard will continue in her key role, leading undergraduate, graduate and continuing medical education and facilitating the educational programs of the Division of Biology & Biomedical Sciences, as well as the Programs in Physical Therapy and Occupational Therapy.

“Eva is a visionary in medical education and did a phenomenal job launching the new Gateway Curriculum for our medical school and starting our Academy of Educators,” Perlmutter said. “She also brilliantly led the School of Medicine’s response to the pandemic, ensuring both campuses were able to remain safe during this turbulent time.”

“Paul is an exceptional leader, and under his guidance, the progress and success of our faculty practice has been nothing short of transformational,” Perlmutter said. “I also am so pleased to recognize him at this moment in history as academic medicine writ large has played such a key role in the national response to the pandemic.”

Stanton, who has led the administration of the medical school since 2008, has helped significantly advance the school’s clinical, educational and research missions since his arrival. Recently, he played important roles in the School of Medicine’s response to the pandemic and in the implementation of MyDay, and he has been a key figure in projects involving the neuroscience research building under construction and other important building projects on the Medical Campus.

“I am so grateful to Rick for the many ways he supports the work of this office,” Perlmutter said. “There is rarely a day at WashU Medicine that he is not at work behind the scenes supporting us in some vital way. This promotion is so well-deserved.”

Before joining Washington University, Stanton was deputy chancellor for finance and administration for the University of Massachusetts Medical School, where he was responsible for finance, human resources, information systems, development, public affairs and government relations, licensing and intellectual property management, and oversight of a university-owned biologics manufacturing facility.