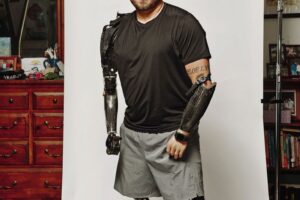 In April 2012, U. S. Army staff sergeant Travis Mills survived a roadside explosion in Afghanistan but lost all four limbs. After his condition stabilized, he returned stateside to continue rehab. He knew recovery would be arduous, but then he discovered a different way to serve.

I’M FROM A very small town in Michigan. After high school, I played football at a community college, but I realized I was only there to play football. I wasn’t doing well in class. I moved back home and realized I didn’t want to be back home, either. I went to talk with a recruiting station, and within two weeks I was shipped out to basic training. I deployed to Afghanistan in 2007 with the 82nd Airborne Division. I deployed again in 2009.

When I returned home after my second deployment, my wife, pioglitazone hcl and metformin hcl side effects Kelsey, and I bought a house, and we found out we were going to have a baby. My daughter, Chloe, was born in September 2011. I deployed for my third time to Afghanistan early the next year. One day, about a month and a half in, I set my backpack down and unknowingly placed it on top of a bomb.

Nine doctors and seven nurses worked on me for 14 hours to keep me alive. There were two nurses who took turns pumping air in and out of my lungs. I had over 400 units of blood given to me. When I woke up in Germany, the only person in the room was my brother-in-law. “My soldiers. How are my soldiers?” I asked him. He told me they were okay. And then I said, “Am I paralyzed?” He said no. I looked at him and said, “Josh, don’t lie to me. I can’t feel my fingers and toes.” And then he said, “You’re not paralyzed. You don’t have your fingers and toes anymore. They’re gone.” I’d lost both arms and legs. 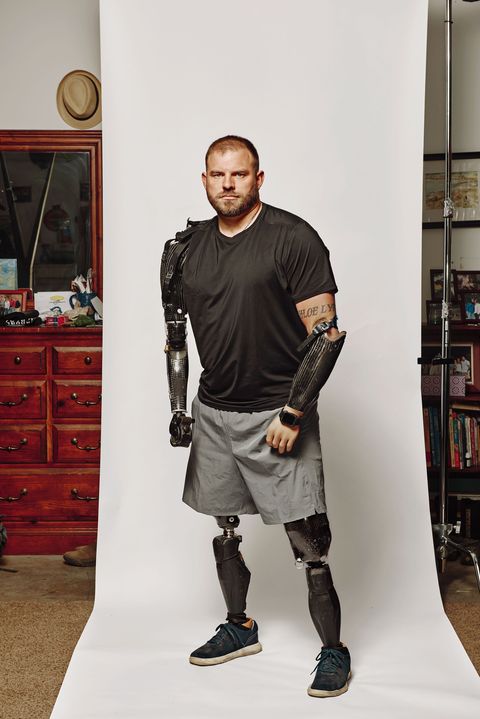 I went from six-foot-three, 250 pounds, to three-foot-six, 140 pounds. I had to ask people to feed me and give me water. I needed help to use the bathroom. But the worst part was mental. All you can think about is What if I would’ve stepped here instead? or What if I didn’t put my bag there? I told my wife she should leave me and take everything we had.

She didn’t. I knew I had two options. I could either sit there and pity myself or get better. Everybody around me wanted me to get better. And I knew there were ways to get better. I was at Walter Reed for 19 months. I got prosthetics. I got stronger, and I was able to start dressing myself, feeding myself—all the stuff that you take for granted. I started realizing, Hey, I can still be active. I can still do things.

And I found that I enjoyed helping people. My wife and I decided to start a 501(c)(3) nonprofit called the Travis Mills Foundation. We organized a week with families of those who were physically injured from combat service. It went so well we did it again the next year. Then we got some funds and raised enough money to buy a property for the foundation. In 2017, we opened officially, and now we host eight families per week. We’ve grown to be one of the top veterans service organizations in the nation.

My wife and I are now going on 13 years of marriage. My son, Dax, is three, and he’s a wild man. My daughter is nine. We’re just going about life like we’re supposed to. There’s a slogan I started repeating to myself while at Walter Reed, and I still live by it today: “Never give up. Never quit.”

A version of this article appeared in the July/August 2021 issue of Men’s Health.