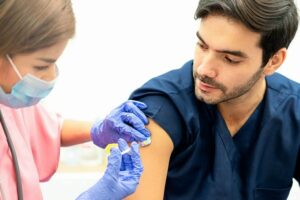 Healthcare workers in a recent Medscape poll largely favored getting a COVID-19 vaccine booster shot for themselves, but numbers varied by their healthcare role.

Respondents in health business/administration topped the list among those likely to get the booster, at 85%. Physicians were next highest, at 82%, followed by nurses/advanced practice registered nurses (APRNs), at 77%, amlodipine migraine side effects and pharmacists, at 74%. Between 7% and 9% were unsure across all four groups.

Across groups, similar percentages of respondents said they would continue to get the COVID-19 vaccine if it is eventually recommended that it be taken every year.

Most Are Concerned Protection Has Weakened

The poll included 510 physicians, 2112 nurses/APRNs, 211 pharmacists, and 215 people in health business/administration, and survey responses were gathered from October 20 to October 27.

Almost all of the respondents (between 94% and 97%) were fully vaccinated across all four groups.

One commenter on the poll, a DPM, said: “At age 78, with a pacemaker and severe atopy (which according to the data leaves me with a greater tendency to [be a] long hauler), the issue of taking the vaccine…and booster was not an argument.”

Responses were lower when the poll asked, “Do you believe there is enough scientific information available to support the need for COVID-19 booster shots?” Physicians and those in health business/administration were most convinced (71% answered yes). Only 64% of nurses/APRNs and 66% of pharmacists answered yes. Between 10% and 14% across all four groups were unsure.

Percentages were similar when respondents answered another question about science: “Do you believe the scientists who say the COVID-19 booster shot is the best way to ‘stay ahead of the virus?’ “

Some Still Question the Science

Previous news reports indicate there are still many in the healthcare field questioning the effectiveness of boosters.

Medscape Medical News reported in September that a team of healthcare experts wrote in a viewpoint article in The Lancet that current scientific evidence does not indicate that people who are not immunocompromised need booster shots of COVID-19 vaccines.

An earlier Medscape poll related to the subject (taken August 25-September 6) showed that the same percentage of physicians (71%) as in the current poll believed there was enough science to support the booster, but in the earlier poll there was a smaller faction who said no (12%), compared with 19% In the current poll.

The previous poll also analyzed responses from doctors outside the United States and they were much less likely than US doctors to say that the evidence supports boosters. Only 42% of about 200 doctors outside the United States thought boosters were needed; 32% said the evidence doesn’t support them, and 27% said they were unsure.

Marcia Frellick is a freelance journalist based in Chicago. She has previously written for the Chicago Tribune, Science News, and Nurse.com, and was an editor at the Chicago Sun-Times, the Cincinnati Enquirer, and the St. Cloud (Minnesota) Times. Follow her on Twitter at @mfrellick.