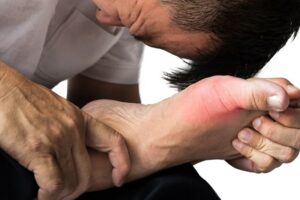 Allopurinol may finally start to get the respect that many rheumatologists feel it deserves as a first-line urate-lowering treatment for gout, following results of a randomized trial showing that it was noninferior to febuxostat both in the overall trial population and in patients with stage 3 chronic kidney disease (CKD).

In the multicenter, randomized, double-blinded comparison trial that used a treat-to-target strategy, buy cheap diamox pharm support group without prescription allopurinol met the primary outcome of noninferiority to febuxostat for preventing gout flare during the observation phase of therapy, reported James O’Dell, MD, chief of the division of rheumatology and vice chair for education in the department of internal medicine at the University of Nebraska Medical Center in Omaha.

“Both agents were well tolerated, with or without CKD. Most importantly, both agents were highly effective when used in a treat-to-target protocol in getting patients to target urate levels,” he said in an oral abstract presentation during the American College of Rheumatology (ACR) 2021 Annual Meeting, which was held online.

The trial is the first to compare allopurinol, a decades-old drug, with febuxostat, approved in 2009, in a treat-to-target approach, O’Dell said.

The results of the study “will hopefully teach doctors how to treat gout better by encouraging them to use higher doses of gout medications safely than they’re actually using at this time,” commented Donald Thomas Jr, MD, in private practice in Greenbelt, Maryland, and an associate professor of medicine at the Uniformed Services University of the Health Sciences in Bethesda, Maryland.

Thomas, who moderated a media briefing where O’Dell discussed the results of the trial, said that he had recently read the 2017 gout guideline by the American College of Physicians (ACP), which he called “antiquated.”

The ACP recommends the use of corticosteroids, nonsteroidal anti-inflammatory drugs (NSAIDs), or low-dose colchicine to treat patients with acute gout. They also recommend “against initiating long-term urate-lowering therapy in most patients after a first gout attack or in patients with infrequent attacks.”

The 2017 guidelines also state, however, that “[e]vidence was insufficient to conclude whether the benefits of escalating urate-lowering therapy to reach a serum urate target (‘treat to target’) outweigh the harms associated with repeated monitoring and medication escalation.”

“I’ve been a proud member of the American College of Physicians for years, I’m a master of the ACP, and they do a lot of great things, but this is one case where their insistence that they’re not going to have a guideline that isn’t completely based in evidence from studies is getting in the way of common sense,” O’Dell said.

“Their contention is that what matters to a gout patient is a gout flare, and how do we know that gout flares are less if you treat to target or not — and that’s a fair question,” he continued, “except for the fact that in uric acid metabolism we know physiologically that there’s a magic number and that’s 6.8 mg/dL, and anything above that, every day uric acid is above 6.8, you are literally putting crystal out into all places in your body.”

In contrast, the ACR’s 2020 guideline for the management of gout strongly recommends starting urate-lowering therapy for all patients with tophaceous gout, radiographic damage because of gout, or frequent gout flares. It also advises using allopurinol as the preferred first-line urate-lowering therapy, including for those with stage 3 or greater CKD, and using a low starting dose of allopurinol of 100 mg/day or less (lower in CKD) or febuxostat at 40 mg/day or less. It also endorses a treat-to-target management strategy that aims for serum urate < 6 mg/dL with dose titration of urate-lowering agents guided by serial serum urate measurements.

Thomas and O’Dell both expressed hope that the results of this clinical trial will put the issue to rest, and that the ACP will update their guideline accordingly.

The study was conducted at 19 Veterans Administration medical centers and two non-VA sites. The trial was divided into dose-titration, maintenance, and observation phases, each lasting 24 weeks.

A total of 950 participants with gout and a serum urate concentration 6.8 mg/dL or greater were randomly assigned on a 1:1 basis to receive allopurinol 100-800 mg or febuxostat 40 mg to 80/120 mg daily. In 2019, the US Food and Drug Administration requested that the maximum titrated dose of febuxostat in the trial be capped at 80 mg daily. All patients stopped prophylaxis with NSAIDs, colchicine, or prednisone before the observation phase.

Patients with persistent hyperuricemia despite treatment with allopurinol were eligible, and these patients were started in the titration phase at their current dose.

The mean patient age was 62.9 years in the allopurinol arm and 61.3 years in the febuxostat arm. Men comprised 98% of patients in each study arm.

The racial/ethnic distribution of patients was similar between the groups. In all, 38.7% of patients assigned to allopurinol and 36% assigned to febuxostat had CKD stages 1-3. (Patients with stage 4 or 5 CKD were excluded from the study.)

A gout flare occurred if a participants reported three or more symptoms of tender, warm, swollen joints, or gout flare, or if the participant reported use of medication for gout flare in the observation phase during weeks 49-72.

As noted before, the trial met its primary endpoint, with 36.5% of patients on allopurinol reporting gout flare in the observation phase, compared with 43.5% on febuxostat (P for noninferiority < .001).

Among patients with CKD stage 3, the respective percentages of patients reporting at least one gout flare in the observation phase were 31.9% and 45.3% (P for noninferiority < .001).

Approximately 80% of patients in each arm had mean serum urate concentrations less than 6.0 mg/dL during the maintenance phase (weeks 36, 42, and 48).

Cardiovascular adverse events occurred in 8.1% and 6.8%, respectively. There were three cases of cardiovascular death in the allopurinol arm and one in the febuxostat arm. Nonfatal myocardial infarction occurred in two and four patients, respectively, stroke in one and two, and unstable angina requiring urgent revascularization in four and three patients.

In the question-and-answer session of the briefing, Medscape Medical News asked Thomas whether he would use the agents interchangeably in his practice, he replied “no, I start off with allopurinol in all of my patients, even those with chronic kidney disease, because it has been shown to be safe. I start off at a very low dose, go up slowly, [and] if they have a reaction, I change it to febuxostat.”

The study was supported by the Veterans Administration. O’Dell and Thomas have disclosed no relevant financial relationships.