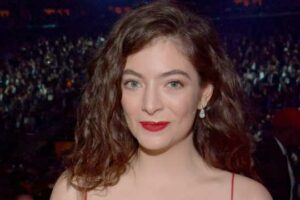 Back in June, when Lorde surprise-released her comeback single and video "Solar Power" —featuring a sunflower yellow Collina Strada two-piece, lamictal lower sperm count a Midsommar-esque cult of sun-kissed followers, and a fennel bong — we couldn't help but feel there was something gently tongue-in-cheek about the whole affair. Was the singer gently (if affectionately) trolling the world of wellness influencers with her talk of "leading the boys and girls onto the beaches?" Or when she described herself as "kinda like a prettier Jesus?"

Either way, there's certainly one element of Lorde's "Mood Ring" video, her new single released earlier today, that is no joke: her brand-new blonde hair. Yes, you read that right. The musician, once pop's most eminent goth princess, switched out her famously lengthy dark brown tresses for the video, opting instead for an icy, near-white shade that wouldn't look out of place on a Byron Bay influencer's perfectly curated feed. (Or even Khaleesi, mother of dragons.)

Dressed in coordinating mint green dresses, Lorde and her followers sway gracefully within the ethereal glow of her neutral-toned tent. Joining hands and leaning to the floor like a prayer circle of synchronized swimmers, Lorde sings to her group to begin their sun salutations and transcendental meditations. "You can burn sage, and I'll cleanse the crystals," she adds. Whether her wellness influencer shtick is authentic or not, there's one thing we know: the look sure does suit her.