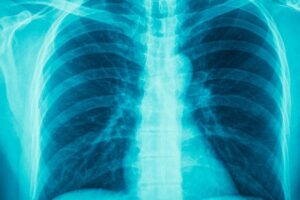 Several emerging bronchoscopic treatments have the potential to improve the quality of life for patients with chronic obstructive pulmonary disease, an investigator reported at the annual meeting of the American College of Chest Physicians.

Targeted lung denervation is one promising novel therapeutic option that is safe and may improve clinical outcomes according to investigator Christian Ghattas, MD.

“Outcome data of longer follow-up on previously treated patients will provide us with more information on the durability and the effect of this treatment,” Ghattas said in an online presentation at the CHEST meeting, which was held virtually this year.

The targeted lung denervation system under study (dNerva®, Nuvaira Inc.) involves the use of a radiofrequency catheter to ablate the peribronchial branches of the vagus nerve, Ghattas said.

The goal of disrupting pulmonary nerve input is to achieve sustained bronchodilation and reduce mucous secretion, thereby simulating the effect of anticholinergic drugs, he added.

In pilot studies, the targeted lung denervation system demonstrated its feasibility and safety, while modifications to the system reduced the rate of serious adverse events, according to Ghattas.

In the AIRFLOW-1 study, which evaluated the safety of the latest generation version of the system, 30 patients with COPD were randomized to targeted lung denervation at one of two doses, 29 or 32 watts.

Of those 30 patients, 29 (96.7%) had procedural success, meaning the catheter was inserted, guided to its intended location, and removed intact with no reported in-hospital serious adverse events, according to results published in Respiration.

Procedural success, defined as device success without an in-hospital serious adverse event, was 96.7% (29/30). The rate of TLD-associated adverse airway effects requiring intervention was 3/15 in the 32 W versus 1/15 in the 29 W group (P = .6). However, serious gastric events were noted in five patients, prompting safety improvements and procedural enhancements that reduced both gastrointestinal and airway events, according to the study report.

In that study, targeted lung denervation plus optimal drug treatment led to fewer respiratory adverse events of interest, including hospitalizations for COPD exacerbation, according to a report on the study that appears in The American Journal of Respiratory and Critical Care Medicine.

Respiratory adverse events occurred in 32% of treated patients versus 71% of sham-treated patients in a predefined 3- to 6.5-month postprocedure window, the report says.

Currently underway is AIRFLOW-3, a randomized study of targeted lung denervation versus sham procedure in patients with COPD. The study has a primary outcome measure of moderate or severe COPD exacerbations over 12 months and is slated to enroll 480 patients.

To be eligible for AIRFLOW-3, patients must have had at least two moderate or one severe COPD exacerbation in the previous year, Ghattas said.

One novel intervention with the potential to benefit patients with chronic bronchitis is metered cryospray (RejuvenAir), which works by delivering liquid nitrogen to the tracheobronchial airways, according to Ghattas.

This targeted delivery ablates abnormal epithelium, facilitating the regeneration of healthy mucosa, according to investigators in a recently published single-arm prospective trial.

Metered cryospray was safe, feasible, and linked to clinically meaningful improvements in patient-reported outcomes among patients with COPD, according to authors of the study, which appears in the European Respiratory Journal.

In the study, 34 of 35 participants received three treatments 4-6 weeks apart.

There were 14 serious adverse events, none of which were device- or procedure related, according to investigators.

An ongoing randomized study called SPRAY-CB is comparing metered cryospray to sham procedure in an anticipated 210 patients with COPD with chronic bronchitis.

Bronchial rheoplasty (RheOx, Gala Therapeutics), is another promising intervention under investigation for the treatment of chronic bronchitis, according to Ghattas.

This system delivers nonthermal pulsed electrical energy, Ghattas said, with the intention of ablating goblet cells in the airways.

“The preclinical studies have demonstrated epithelial ablation, followed by regeneration of normalized epithelium,” he said in his presentation.

In 12-month results of multicenter clinical trial, bronchial rheoplasty was technically feasible and safe, with reductions in goblet cell hyperplasia and changes in patient-reported quality of life seen following the procedure, investigators reported in The American Journal of Respiratory and Critical Care Medicine.

The mean goblet cell hyperplasia score was reduced by 39% from baseline to treatment, according to study results. Four procedure-related serious adverse events were observed through 6 months, and there were no procedure- or device-related serious adverse events over the next 6 months. Mild hemoptysis occurred in 47% of patients, investigators reported.

A larger randomized, double-blind prospective trial with a sham control arm is underway and will include 270 patients, according to Ghattas. “We’re going to have to wait for the results,” he said.