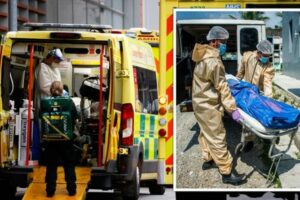 WHO calls for action as Europe coronavirus cases rise

Vaccines deployed against the virus are successfully driving down caseloads. However, hospital deaths involving COVID-19 patients are now once again on the rise, fanning concerns over the long-term efficacy of current safety measures. As researchers continue to investigate the fatal nature of the virus, they have identified one key element which they believe could shed new light on the matter, and pave the way for new preventative measures.

A team of researchers, allied international manpower services inc led by the NYU Grossman School of Medicine, revealed that a build up of coronavirus in the lungs is one of the likely causes behind the steep mortality rates seen during the pandemic.

The study showed that people who died of COVID-19 had on average 10 times the amount of viral load in their airways, compared to severely ill patients who survived their illness.

Researchers cautioned that this may be due to frequent course of antibiotics given to critically ill patients.

Lead study author Imran Sulaiman, adjunct professor in the Department of Medicine at NYU Langone, said: “Our findings suggest that the body’s failure to cope with the large numbers of virus infecting the lungs is largely response for COVID-19 deaths in the pandemic.”

Researchers had previously argued that simultaneous infections, such as bacterial pneumonia or overreaction of the body’s immune defence system could explain the heightened risk of death.

The team felt compelled to clarify the role of secondary infections, immune cell populations and viral loads in COVID-19 mortality, according to the lead author.

In order to do so, they collected bacterial and fungal samples from the lungs of 589 men and women hospitalised with COVID-19 who required mechanical ventilation.

A subset of 142 patients who received a procedure to clear their air passages were also included in the analysis.

The researchers monitored the amount of virus residing within the airways to identify the microbes present, and survey the type of immune cells and compounds present.

The evidence however, did not implicate a secondarily infection as the cause of the death, according to the team.

Findings showed that patients who died had on average 50 percent lower production of an immune chemical that targets the virus, compared with patients who survived the illness.

This so-called immune chemical consists mainly of customised proteins which are part of the body’s adaptive immune response.

The study’s senior author Leopoldo Segal, said: “These results suggest that a problem with the adaptive immune system is preventing it from effectively combating the coronavirus.

“If we can identify the source of this issue, we may be able to find an effective treatment that works by bolstering the body’s own defences.”

The findings come as recent official figures revealed the virus is claiming 100 lives a day on average across the UK.

Scientists and academics investigating the profiles of those succumbing to the virus found that, despite catching Covid at relatively similar rates, men are still dying more than women.

However, the risk of severe illness and death from COVID-19 remains extremely low in children and teenagers.

Senior officials at the World Health Organisation (WHO) have cited stagnating vaccination rates in poorer countries as one of the driving forces behind COVID-19 deaths.

WHO Europe director Hans Kluge, said: “Last week there was an 100 percent increase in the number of deaths in the region – one reliable projection is expecting 236,000 deaths in Europe, by December 1.”

Kluge said high caseloads of the virus could be attributed to the more transmissible Delta variant, an “exaggerated easing” of restriction and measures and a surge in summer travel.