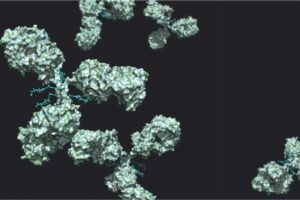 Severe acute respiratory syndrome coronavirus 2 (SARS-CoV-2), identified as the causative agent of the COVID-19 (coronavirus disease 2019) pandemic, was first detected in Wuhan, China late December 2019. However, no effective drugs or treatment strategies have been developed since then to combat the complicated manifestations of disease that afflict individuals of all ages, health conditions and ethnicities.

While SARS-CoV-2 vaccines, developed at an unprecedented pace, are administered to combat the virus, there is an urgent need for therapeutics against the SARS-CoV-2 – especially with the emerging threats of variants that may evade vaccines.

In an effort to hasten the research on identifying antiviral drugs for SARS-CoV-2 infection, researchers from the U.S. and Switzerland performed extensive drug screening for antiviral activity using live virus infection in human respiratory cells. As a result, zoloft tinnitus they identified a set of possible drug candidates that could potentially be tested in clinical trials.

They observed that combining pyrimidine biosynthesis inhibitors with antiviral nucleoside analogs synergistically inhibited SARS-CoV-2 infection in vitro and in vivo. A pre-print version of the research paper is available on the medRxiv* server while the article undergoes peer review. 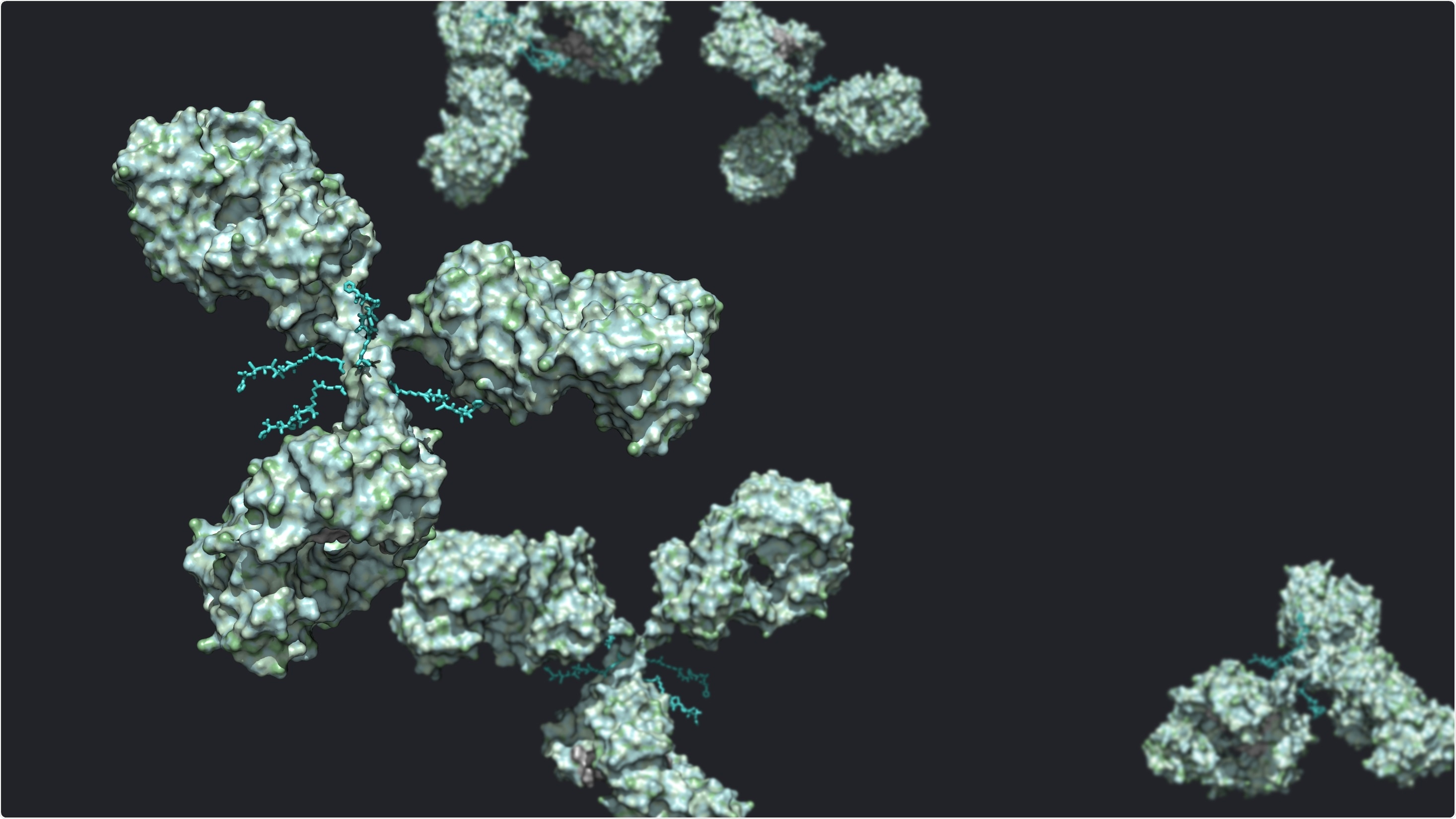 “Widespread efforts are underway to identify essential host pathways that are druggable, and to repurpose therapeutics against these host targets.”

The viruses depend on the host nucleoside biogenesis for viral replication as they require high levels of nucleoside triphosphates (NTPs) for their growth.

RNA viruses, such as the coronaviruses, replicate using a virally encoded RNA-dependent RNA polymerase (RdRp); inside the host when nucleoside analogs are misincorporated during the process, it can lead to chain termination or mutagenesis, ultimately inhibiting viral replication. This provides an opportunity to kill the virus using suitable analogs and inhibitors.

Nucleoside analogs are a common class of drugs that are synthetic analogs mimicking their physiological counterparts. Remdesivir (FDA-approved for use in COVID-19) and Molnupirivir (in clinical trial) are misincorporated by the viral RdRp leading to delayed chain termination and increased viral mutagenesis, respectively; thus achieving the antiviral activity.

There are distinct cell-type-specific pathways for entry and other steps in the viral lifecycle. Since the researchers in this study were looking for antivirals that would be active in the respiratory tract, they used the human respiratory cell line Calu-3 to identify potential antivirals.

Using small-molecule libraries containing approved drugs, drugs in clinical trials, and drugs with known targets, the researchers screened candidates to uncover both direct-acting and host-directed antivirals. In the study, they used wild-type virus and a cell-based, high-content assay in respiratory cells and optimized a microscopy-based assay to achieve robust screening parameters (Z’>0.5) using vehicle (DMSO) and Remdesivir (10uM) as controls on each plate.

“Altogether, we have screened a large fraction of the drugs that can potentially be rapidly repurposed in respiratory cells with live virus complementing previous screening efforts.” 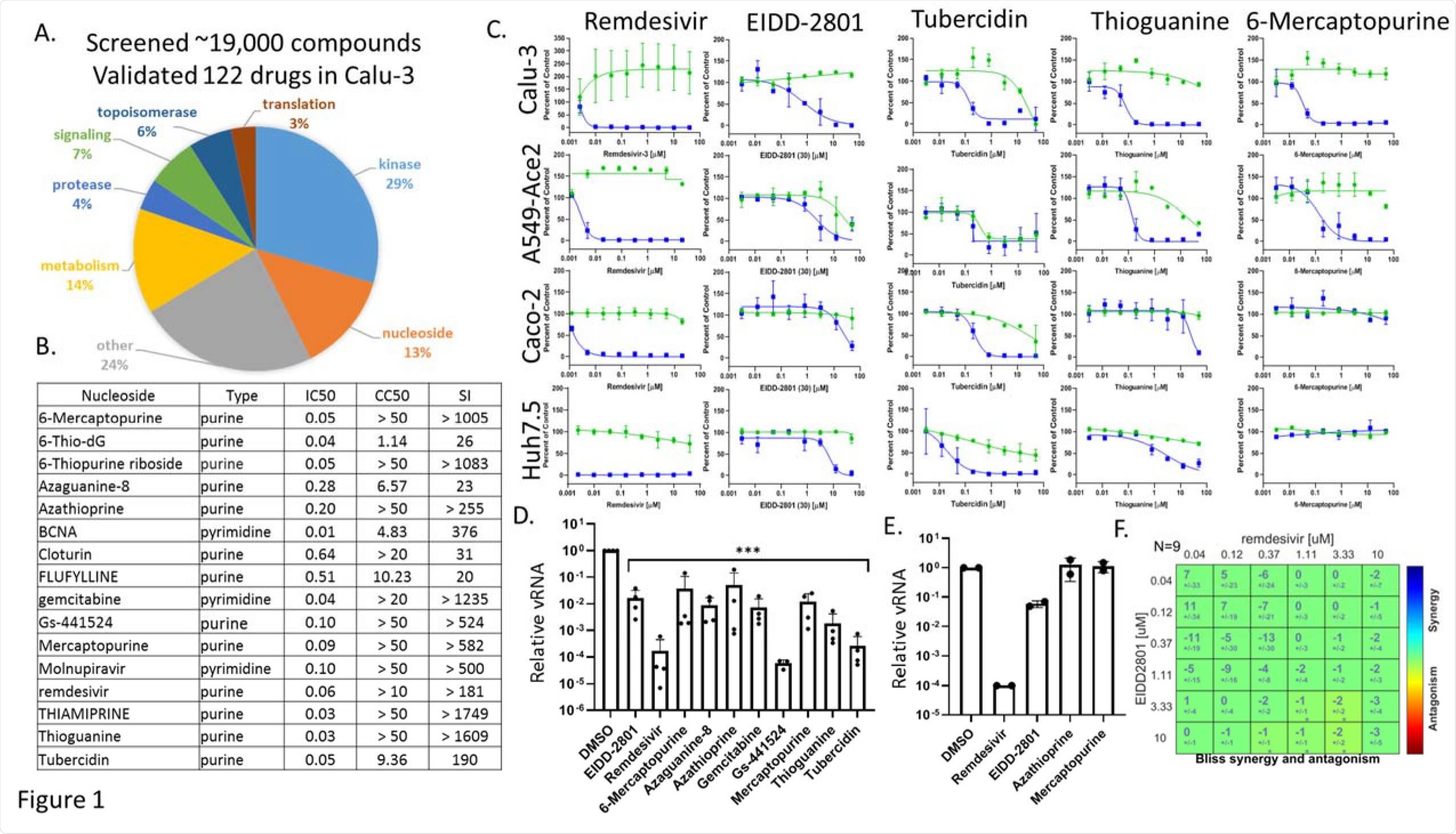 Along with Remdesivir and Molnupirivir, the researchers identified other nucleoside analogs with antiviral properties against SARS-CoV-2. The researchers also determined the breadth of the antiviral activity by testing these nucleosides analogs in a panel of infected cell lines – that are permissive to infection with SARS-CoV-2,  such as the human respiratory A549-expressing human ACE2, the human intestinal epithelial Caco-2 cells, the human hepatocyte Huh7.5, and African green monkey Vero cells. In addition, they demonstrated that both  Remdesivir and Molnupirivir showed activity across diverse cell types.

The other antiviral nucleoside analogs in this study were antimetabolites, which are generally used for cancer or immunosuppression. They tested tubercidin, Thioguanine, and 6-Mercaptopurine for antiviral activity.

Further, testing the effect of the inhibition of the de novo nucleotide biosynthesis, they identified a subset of pyrimidine and purine biosynthesis inhibitors. They also confirmed that altering the nucleoside pools can successfully block viral replication. The reported striking synergy between DHODH inhibitors (Brequinar or BAY-2402234) and the nucleoside analogs (Molnupiravir or Remdesivir).

When testing for activity against infection with variants of SARS-CoV-2, the researchers noted, “limiting the pyrimidine pool in combination with direct-acting antivirals increases the antiviral activity of nucleoside analogs against diverse strains of SARS-CoV-2.”

Further, the researchers tested for combined treatments and found a robust reduction in viral replication upon co-administration of either of the DHODH inhibitors (Brequinar or BAY-2402234) and Molnupirivir. They also confirmed this in vivo reporting: a combination of Molnupiravir and Brequinar reduces viral replication with decreased pathology in the mouse models.

“Molnupiravir and Brequinar are both orally dosed drugs that are undergoing clinical trials in COVID-19 patients, and we observed synergistic antiviral activity with these drugs in diverse model cell systems.”

This study suggests combining several antiviral treatments to suppress the viral infection may be a promising method for treating COVID-19. Combining nucleoside analogs with DHODH inhibitors would be beneficial, as the combination would both reduce replication and inflammation due to SARS-CoV-2 infection within therapeutic ranges, the researchers conclude.