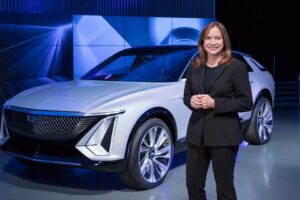 If your customers are going to be inconvenienced dealing with a recall, as well as all the precautions that come along with it, you may as well deal with it all, too. That’s precisely what General Motors CEO Mary Barra is doing, and it’s quite respectable.

Barra recently revealed in an interview that’s she’s currently driving a recalled Chevrolet Bolt EV. GM recalled some 140,000 Bolt EVs and EUVs due to a battery issue that could potentially cause a spontaneous fire.

A report in the Detroit Free Press references an interview in which Barra talked with Andrew Ross Sorkin during the New York Times DealBook Online Summit. Sorkin waited until the end of the interview to ask Barra which car she drives. She replied:

“I’m driving a Bolt EV. I’m loving it. When people get to drive an electric vehicle, I think they’ll find that they’re not giving anything up, in fact they’re getting it, the customer experience is great.”

A spokesperson from GM verified that Barra’s Bolt EV is one of the recalled cars. However, he couldn’t confirm whether or not her car has been repaired yet.

Barra went on to say that her son and husband are fans of the Camaro and Firebird. The family also owns a Corvette. She added that they’ll own a GMC Hummer EV soon, and they’re on the list of “hand-raisers” for the upcoming, all-electric Cadillac Lyriq.

As legacy automakers move forward with electrification and announce lofty goals going forward, it’s important for high-ranking executives to drive the electric cars and prove that they’re truly on board with the transition. When asked what number she is on the upcoming EV reservation lists, Barra said:

“Well I try to be fair. I think it’s important for me to demonstrate our product, but I signed up like everyone else for the Hummer. When we started the Hummer, we overloaded the internet, so I was texting the head of GMC Buick and I managed to get on the list.”