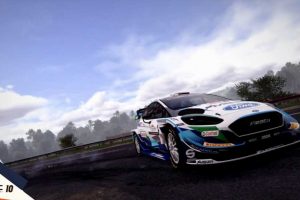 Nacon and KT Racing have announced the next entry in the WRC series, the official game of the World Rally Championship. WRC 10 will arrive later this year, and brings new game modes and content to the series.

The 2022 season of WRC will be the 50th in the modern format, with the FIA WRC replacing the International Championship for Manufacturers in 1973. To celebrate the 50 seasons, WRC 10 will bring in some of the most famous rallies and cars from the history of the championship.

In this historic mode, players can race 19 events across six rallies from WRC’s past — including the Rally Acropolis, Rallye Sanremo, and Rally Argentina — in 20 legendary cars. That will include the Lancia Delta Integrale, Audi Quattro, and the first ever champion Alpine A110. The stages also include in-period driving conditions, for a serious challenge.

There’s an overhaul in Career mode, which will see players put their own stamp on their game. A new livery editor will allow players to create their own custom teams, running in their own liveries, alongside the official championship cars. This includes WRC2, WRC3, and Junior WRC alongside the top-level WRC.

All this comes in addition to the regular expected content. You’ll be able to compete in all of the rallies of the 2021 World Rally Championship, including the four new events in Belgium, Croatia, Estonia, and Spain, and in machinery from 52 official teams across the four classes of the WRC ladder.

The game’s physics are enhanced from WRC 9 too, with new depth for aerodynamics, braking, and turbo pressure on all surfaces. Nacon also promises a “completely reworked” audio engine.

WRC 10 will arrive on PlayStation 4 and 5, Xbox One and Series, and PC on Epic and Steam on September 2, 2021. A Nintendo Switch version will also come along at a later date.