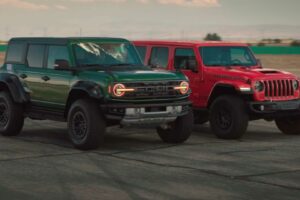 High-powered, off-road capable SUVs are quite abundant. Old icons are back, and they’re better than ever. A new Hagerty video shows off four of the hottest examples to see which is the quickest in the quarter-mile. The lineup includes the Ford Bronco Raptor, the Jeep Wrangler 392, the Land Rover Defender, and the Mercedes-AMG G63.

The Wrangler’s extra power and lighter curb weight see the Jeep get a victory over the Ford. It took the Jeep 12.9 seconds to cross the finish line. The Bronco needed 14.7 seconds to complete it, sending the Jeep to compete against the Land Rover and Mercedes.

The G63’s extra power is enough to keep the big SUV ahead of the other two, crossing the quarter-mile finish line in 12.5 seconds. The Wrangler finishes a close second. While the Defender came in third, it was close to the pack and gaining, completing the drag race in 12.9 seconds.