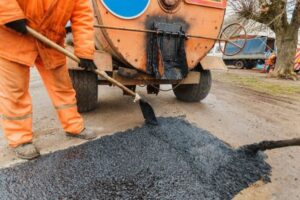 The new research uncovered by Bill Plant Driving School found there were 240,000 complaints made to local councils across the UK in 2020. However, a quarter of these came from residents in Surrey with over 64,100 complaints received.

Kent was the second-highest region with almost 21,000 pothole complaints followed by east Sussex at 19,491

Hampshire recorded more than 15,000 issues while Derbyshire saw 14,156 complaints over the course of last year.

Despite the issues, none of the top four councils were among the areas that fixed the most potholes or spent the most on compensation payouts.

Over 800,000 potholes were fixed across the UK last year with 100,262 coming directly from Nottinghamshire.

Derbyshire fixed over 98,000 potholes while over 70,000 were repaired in Lincolnshire.

Lastly, the FOI revealed more than £862,000 in compensation was paid out to drivers following accidents.

Drivers in Oxfordshire received over £79,000 while Staffordshire motorists got £66,188.

Tom Hixon, Head of Instructor Support at Bill Plant warned potholes were a “danger” and could lead to “significant road safety issues”.

He said: “Potholes are such a danger on our roads in the UK.

“They can damage suspensions, axles and wheels, with accidents typically occurring by drivers trying to avoid them.