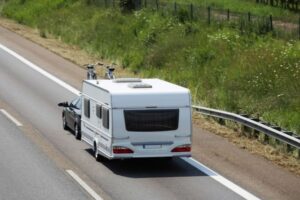 RAC shares their guide to towing a caravan

Earlier this month, the Government unveiled plans to scrap car and trailer driving tests as of September 20. The car and trailer, or B+E test, was the practical exam drivers needed to take in order to tow a trailer or caravan on the roads.

The test involves performing manoeuvres with a trailer attached to a car, with drivers judged on how well they perform on the road, much like a standard driving test.

Drivers who passed their car test before January 1, 1997, can tow a car and trailer combination up to 8,250kg maximum authorised mass (MAM).

This move was seen to have been taken to help ease pressures on the UK’s HGV driver shortage.

The industry has been hit hard by Brexit and the pandemic, with figures estimated that put the current HGV capacity shortfall at around 100,000 drivers.

This includes 15,000 European drivers who have left the UK after Brexit.

Coventry Trailer Training is one of the largest providers of B+E car and trailer test training in the Midlands but has been massively affected by the Government’s decisions to scrap tests.

A spokesperson for the company spoke of how the decision to ditch tests has affected their business, and how it will impact road safety.

Speaking to Express.co.uk, they said: “My work just fell off a cliff that day pretty much.

“I could have filled up until Christmas really with the amount of people on the waiting list to do the test.

“I had solid bookings in the diary for the next seven weeks, and they all just changed their minds.

“A handful of them have decided to do a bit of training, but that’s only about a quarter of the time that it would have taken to get to test standard.