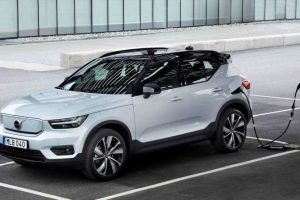 Volvo CEO Håkan Samuelsson indicated that he expected the automaker to offer a lineup composed entirely of electric vehicles by 2030, speaking at the Financial Times Future of the Car Summit this week.

“I would be surprised if we wouldn’t deliver only electric cars from 2030,” Samuelsson said at the meeting, echoing the U.K.’s own reported plans to phase out sales of new gas and diesel-engined cars by 2030.

Volvo has made similar forward-looking statements in the past, indicating it expects 50 percent of its car sales will be battery-electric or plug-in hybrid vehicles by 2025. And the company has also committed to put one million electric cars on the road by then.

“Every new Volvo car launched from 2019 onwards will have an electric motor,” the automaker said earlier. “This ambitious commitment shows that at Volvo Cars we dare to take the lead and embrace a cleaner mobility. It underlines our aim to reduce the environmental impact of our products, and to improve air quality in our cities. Most of all, it shows that we listen to our customers and their needs.”

However, Samuelsson’s comments sparked some debate among industry observers regarding whether this is achievable on such a timetable, and whether more realistic market considerations should guide such plans.

While individual countries like Norway and China, whose capital has more EV charging stations than all of the U.S., have embraced battery-electric vehicles and plug-in hybrids, several large countries where Volvo has a presence have not. Industry observers have pointed out such a plan could mean Volvo’s offerings in some regions including Central Asia, Eastern Europe, North Africa, South America and Southeast Asia, could be quite limited. Some countries lagging in EV adoption but accounting for a substantial percentage of annual Volvo passenger car sales border Sweden itself. The Indian and Russian markets, for example, have not embraced EVs on the scale of countries like Germany, but collectively represent more than a billion people. One does not have to go far for other examples of markets where Volvo has a presence but where battery-electric vehicles account for less than 2% of total sales: the U.S. and Canada.

Industry observers have also noted that while Volvo’s Polestar brand is certainly EV-focused, Volvo itself offers plug-in hybrids but just one battery-electric vehicle: the XC40 Recharge. Can Volvo close this gap in its plan to have 50% of its car sales be electric or electrified by 2025?

“We are determined to be the first premium car maker to move our entire portfolio of vehicles into electrification,” Samuelsson said earlier this year. “This is a clear commitment towards reducing our carbon footprint, as well as contributing to better air quality in our cities.”

Perhaps the greatest progress Volvo has made to date in its drive to electrification is that the automaker’s entire lineup is now available in plug-in hybrid form. Of course, availability and sales are quite different things. It’s one thing to have a lineup filled with PHEVs, and quite another for those PHEVs to account for a large portion of total worldwide sales.

“Every model in Volvo Cars’ line-up is also available as a petrol plug-in hybrid variant, from the small XC40 SUV via the 60 Series cars to the company’s flagship, the large XC90 SUV. Volvo Cars is the only car maker to offer a plug-in variant on every model in its line-up,” the company said earlier this year.

“The mild hybrid configurations deliver a better every day driving experience while reducing fuel consumption and emissions by up to 15 per cent,” Volvo added.

“Taken together this means that, in future, there will be no Volvo cars without an electric motor. And to make sure we have plenty of batteries to power all those electrified Volvos, we have signed large supply deals with LG Chem and CATL, two of the world’s leading lithium-ion battery makers.”

Perhaps batteries will pose the biggest challenge for EV makers in the second half of this decade. As more automakers turn to EVs, the demands on battery production and mining to support it are expected to grow. Even as Tesla exclusively makes battery-electric vehicles, it has seen supply not keep up with its demand for batteries, both when it comes to assembled battery packs and the raw materials mined to create them. As more automakers turn to EVs, it remains to be seen what the second half of the decade looks like for battery production, absent a sudden advancement in battery technology not relying on today’s lithium-ion composition.

Sign up for comments and let us know if you think Volvo’s plans are realistic.