Home » Car Reviews » Will petrol prices come down? Four factors that could make your fuel cheaper

Will petrol prices come down? Four factors that could make your fuel cheaper 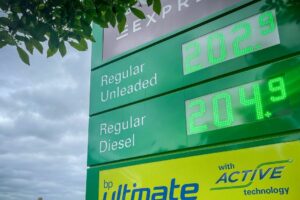 Rising petrol and fuel prices preceded the overall cost of living surge by a few months, reaching new records in 2021. Each successive rise in 2022 has beaten previous records, with unleaded now costing 182.53p per litre and diesel 190.43p, up 7.54p and 5.49p each. Several factors precipitated that rise and will prove vital in helping cut prices down again.

Wholesale petrol prices anchor costs at the pump, as they dictate how much companies pay for their supply.

They best indicate cost trajectory, and recent analysis from the RAC shows a gentle decline.

But it could take some time for this to impact overall pricing, he added, with the UK “still some way from the peak”.

The latest indicators suggest pricing could soon come down, as wholesale costs have reduced slightly since the Platinum Jubilee.

Luke Bosdet, the AA’s fuel price spokesman, said they should be “grinding to a halt” by the end of the week.

Those price savings should “at least temporarily” pass to consumers from forecourts.

Moving on from Russia

Another factor dictating petrol prices is the ongoing Russian invasion of Ukraine.

While fuel costs were already accelerating beforehand, Russia is one of the world’s largest oil exporters, and Europe’s move away from its network has caused prices to rise.

EU nations are in the process of setting up new channels, turning to chief exporter Saudi Arabia for help.

There is no confirmed replacement yet, meaning the pressure remains on petrol from this angle.

The Government has sought to intervene in the cost of living crisis and provide Britons with some respite, and could extend its aid to fuel.

Rishi Sunak previously helped relieve some pressure by cutting fuel duty by 5p per litre during his March mini-budget.

Fuel duty is another price driver, as it determines what stations pay for their supply, meaning they pass off the cost to consumers.

The Chancellor ultimately controls the level of fuel duty, but he has not announced any incoming changes recently.

Some of those watching fuel prices surge to current levels have laid the blame on retailers.

The Government, namely business minister Kwasi Kwarteng, have suggested they are not passing on the 5p per litre fuel duty cut to customers, meaning fuel costs more.

He wrote to the Competition and Markets Authority yesterday to request a review of petrol station operators.

But Gordon Balmer, the executive director of the Petrol Retailers Association, claimed ministers “do not understand how fuel prices are set”, adding the 5p cut must be passed on “by law” and “it has been”.