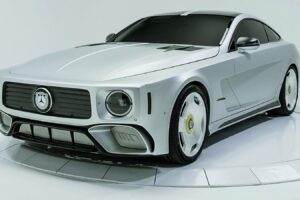 When he was growing up, multi-platinum award-winning artist will.i.am used to listen to his hip-hop heroes regale him with tales of rolling in their Benzes. Owning a Mercedes meant status, power, that you made it. It still does. Now a hip-hop superstar himself, he can own a fleet of them if he wants. But that’s not what excites him, what does is flipping one of the cars he once dreamed about into something special, something with a deeper meaning.

So he embarked on a passion project in cooperation with Mercedes-AMG called “The Flip,” a one-of-a-kind Mercedes-AMG GT Sedan unveiled in Miami as part of the Formula One Miami Grand Prix USA weekend. The car itself, called the WILL.I.AMG, is a reflection of his style and taste. More than that though, it’s a way for him to reach disadvantaged youth and help inspire them to greater things.

The car itself was built by West Coast Customs, one of several special vehicles self-professed car guy has had the famous tuning and build shop create for him in recent years. After getting our first look at it, the old saying “beauty is in the eye of the beholder” applies here, because we’re not beholding much aesthetic beauty in what we’ve seen from the photos. But ultimately there’s one person who it needs to appeal to, and that’s the man who created it and realized his dream of making an AMG his own thing.

As for the car itself, the formerly swoopy Mercedes-AMG GT 4-Door Coupe donor sedan bears little resemblance to what once was after The Flip workover, starting with its signature doors. It goes from four to two colossal, coach style units, complete with the rear view mirrors affixed to the front of them. Open those big ‘ol slabs up and the car assumes a reverse flying-V stance, though this block-sided rolling brick isn’t going to be breaking any aerodynamic records. We’re told there’s some SLS AMG Gullwing influence in there somewhere, but we’re not seeing it short of maybe the split glass roof.

The Flip’s design is also said to crib elements from the Mercedes G-Glass SUV, and those show up front, with its blocky, vertical face punctuated by G-Class style circular headlamps and a massive underbite of a lower fascia. In the spot where the three-pointed star normally resides is a Bear (checks press release). Yes, that’s correct. The Bear, which can also be seen on the rim center caps and has a three-pointy face, was created by will.i.am and is part of a limited-edition Bear Witness apparel and accessories collection. Get ’em while they last!

One thing that hasn’t changed is the engine tune. Will has professed much love for AMG and its powertrains, so the AMG-GT 63 S 4-Door’s wicked 4.0-liter twin-turbo V-8 with 630 hp and 627 lb-ft of torque on tap stays the same. One thing’s for sure, the boxy WILL.I.AMG baller will be plenty fast.

No matter what you think of how it looks, you have to admire what will.i.am’s broader mission is with this car, which is benefitting the i.am/Angel Foundation to help support STEAM-ready (science, technology, engineering, arts and math) educational opportunities for disadvantaged families and communities. Along the way, The Flip team also created a six-part documentary detailing the build called DRIVE, a sneak peek of which will debut in Miami before its full reveal at the 2022 Cannes Film Festival.