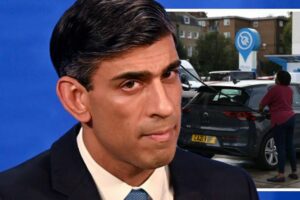 Cost of living: Sunak grilled over delays in steps to help

Chancellor Rishi Sunak revealed the cost-cutting measure for fuel duty as part of his Spring Statement for 2022. The 42-year-old said at the time his proposals would create “a stronger, more secure economy for the United Kingdom”. However, the most recent data has shown diesel prices have reached a record high price of 180.29p a litre.

Prior to this point, the next highest price for diesel had been recorded on March 23, 2022 – the same day Mr Sunak announced his Spring Statement.

A similar trend is also being observed in the cost of petrol where the price per litre is fast approaching the record levels of 167.3p per litre set on March 22.

RAC fuel spokesperson Simon Williams said: “Sadly, despite the Chancellor’s 5p a litre duty cut the average price of a litre of diesel has hit a new record high at 180.29p.

“Efforts to move away from importing Russian diesel have led to a tightening of supply and pushed up the price retailers pay for diesel.

“While the wholesale price has eased in the last few days this is likely to be temporary, especially if the EU agrees to ban imports of Russian oil.

“Unfortunately, drivers with diesel vehicles need to brace themselves for yet more pain at the pumps.

“Had Mr Sunak reduced VAT to 15 percent as we call on him to do instead of cutting duty by 5p, drivers of diesel vehicles would be around 2p a litre better off, or £1 for every full tank.

“As it is, drivers are still paying 27p VAT on petrol and 29p on diesel, which is just the same as before the Spring Statement.

“The average price of petrol is also on the rise, having gone up nearly 3p a litre since the start of the month to 166.65p which means it’s less than a penny away from the all-time high of 167.30p set on March 22.”

When Mr Sunak announced the cut to fuel duty he said it would represent savings “worth over £5 billion”.

He said: “For only the second time in 20 years, fuel duty will be cut. Not by one, not by two, but by 5p a litre – the biggest cut to rates forever.

“Some have called for the fuel duty cut to last until August. I have decided it will be in place until March next year, a full 12 months.”

But less than two months on and his pledge has failed to reduce the financial woes the cost of living crisis is currently having on Britons.

UK Inflation is now at its highest rate for 30 years with the figure expected to be on the rise once more when new data is released on Wednesday.

British households are also having to fork out an extra £700 extra per year in bills due to the latest change to the energy price cap.

Millions of people are feeling the impacts of the new 54 percent rise in the energy price cap, which means a household using a typical amount of gas and electricity will now pay £1,971 per year.

Last month embattled motorists were affected by several weeks of fuel shortages due to protests held at fuel terminals across the south of England.

Activists from Just Stop Oil and Extinction Rebellion teamed up to create chaos at forecourts by glueing themselves to roads and being locked to oil drums.

Both groups said they were protesting to force the Government to agree to end all new fossil fuel investments immediately.

The protests served to exacerbate issues for British supply lines which were already under pressure due to the Russian invasion of Ukraine and an increased demand following the end of Covid lockdowns.