Home » Car Reviews » Why Is Tesla Forcing Software Updates If No Safety Issue Is Involved?

Why Is Tesla Forcing Software Updates If No Safety Issue Is Involved?

There was a theory that it was required by some countries, but that is not the case.

Part of the fascination most people have with Tesla vehicles is the fact that they behave like computers on wheels. All it requires for some improvements is an over-the-air update. There are famous cases of that, but there are also reasons for people not to want them. Well, Tesla is not willing to allow people to oversee these updates anymore. Either you do them, or you lose functionalities that have nothing to do with the updates. But why? 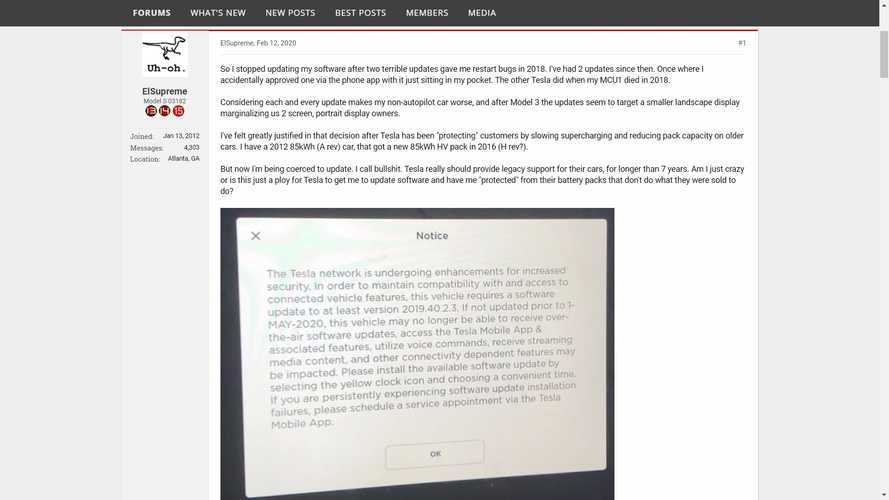 This is the message Tesla owners have received recently – the bold is on us:

The Tesla network is undergoing enhancements for increased security. In order to maintain compatibility with and access to connected vehicle features, this vehicle requires a software update to at least version 2019.40.2.3. If not updated prior to 1-MAY-2020, this vehicle may no longer be able to receive over-the-air software updates, access the Tesla Mobile App & associated features, utilize voice commands, receive streaming media content, and other connectivity dependent features may be impacted. Please install the available software update by selecting the yellow clock icon and choosing a convenient time If you are persistently experiencing software update installation failures, please schedule a service appointment via the Tesla Mobile App.”

For the ones that are always anxiously waiting for updates, this is not an issue, but there are quite a few owners that prefer not to have these updates. Tesla will not give them this option, as you can see above.

It is even a little worse: some people claim that Tesla has made the updates without people allowing the company to do so. Tesla Motors Club forums have specific threads about that. Mr. Green, who has helped us in some articles, said he heard about many such situations.

Anyway, he told InsideEVs he does not feel these cases allow for an independent way to verify their claims.

“The information on unapproved updates is scarce and full of plausible deniability because the event is not recorded car side, and it looks like a person accidentally scheduled the update from the car logs.”

Someone asked Mr. Green on Twitter why would anyone try to avoid updates, and this is his answer:

What Mr. Green mentions about the “battery nerfing” is something we have been investigating: the software updates 2019.16.1 or 2019.16.2 for the Model S and X. There was a suspicion that the voltage cap these updates created was a way to avoid battery fires such as the one that happened in Shanghai in April.  David Rasmussen is even suing Tesla for that.

The Autopilot (AP) nerfing is something European owners fear due to legal restrictions. This TFF-Forum.de thread even brings that up as the main reason for Tesla to impose the update, but there are people in the US receiving the same message, and there are no Autopilot restrictions there – so far.

If Tesla just restricted access to the Tesla network for owners that refuse to update their cars, it would not seem so strange. After all, the company could claim cars without updates could pose a cybersecurity risk, for example. But the company says these cars will lose access to “the Tesla Mobile App & associated features, voice commands, streaming media content, and other connectivity dependent features.”

Apart from the Tesla Mobile App, which may need the Tesla network to perform accordingly, why would anything that does not require that network also be capped? The TMC forum user ElSupreme questions precisely that in this thread.

Unless this is for safety reasons, there is no reason for Tesla to impose what anyone can do with their own cars. For something they paid for.

Why, then, would Tesla be forcing updates on its customers? We have talked to Mr. Green about that, and this is his guess:

“My leading theory is that this one is because they are securing their infrastructure and stopping some less secure practices from the past – switching away from the open VPN they were using as means to communicate to the car.

Of course, they have bundled a bunch of other changes, but that at least allows them to keep pretenses that what they are doing is having nothing to do with wanting people off old firmware for battery or Autopilot fears and whatnot.”

This is not the first episode in which Tesla allegedly goes beyond what it could do. The company has recently revised its Unsupported Vehicle Policy. It said it would block not only supercharging capacity on any car that had a salvage title – even if it had nothing to do with the battery or the powertrain – but also any sort of fast charging in any network.

Rich Benoit, Yaro Shcherbanyuk, and Jason Hughes think Tesla has crossed the line with that. They are probably not happy with the company’s new move, especially Hughes, also known as the Tesla Hacker.

Have you avoided updating your Tesla for any reason? How do you feel about Tesla’s “urge” for people to update even if they have reasons not to? If the company was more transparent about the reasons why this is so important, would that change the situation? Share your comments about this below.