Home » Car Reviews » Which Will Win The Drag Race? An F1 Car, an RC Car or a Honda NSX?

Which Will Win The Drag Race? An F1 Car, an RC Car or a Honda NSX? 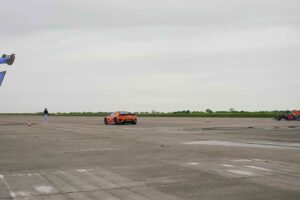 Drag races have pretty much become a staple over at Carwow. They’ve also pitted a lot of, er, vehicles against each other. The channel has raced pick-up trucks, actual trucks, and even a Formula One racer. So what’s next to race?

For this weekend’s drag race, Carwow brought back the NSX and the Formula One car to the dragstrip. But this time around, there is a third challenger, and it’s perhaps the smallest vehicle the team has set on the strip. It’s a remote control car.

Of course, they didn’t just get an off the shelf RC you can find from your nearest toy store. This one comes from Arrma RC, and it’s a serious piece of kit. The model it brought along is dubbed the Limitless, one of the fastest remote-control cars out there.

Aside from packing a small yet highly powerful motor, it also has all-wheel drive and active steering that keeps the car straight at higher speeds. The Arrma Limitless also has lightness on its side, so it could just give the Formula 1 car a run for its money. Speaking of money, a fully-built Limitless goes for about 1,400 pounds in England, or $1,890 at current exchange rates.

The F1 race car facing off the RC comes from Red Bull Racing. It’s not just some demo car, either. The team brought the championship-winning RB7 from 2011. That makes it one of the last cars before the turbo-hybrid era, and it clinched the title for Sebastian Vettel in a very convincing and dominant manner.

The RB7 also won 12 of the 19 races during the 2011 season. Powering the RB7 is a 2.4-liter V8 from Renault with about 750 horsepower (559 kilowatts). Yes, there are more powerful supercars out there but the F1 car tips the scales just a little over 1,650 lbs (under 750 kg). It’s also driven by David Coulthard, so it’s not just some random person driving it.

We won’t spoil it for you but let’s just say it’s a tough match between the RB7 and Arrma Limitless.