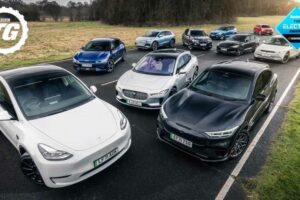 The Model Y is Tesla’s best-selling vehicle at the moment and one of the most popular electric crossovers in the world.

From the get-go, it must be said that the goal with this test was to find the best electric family car, so all these vehicles were mainly judged for their practicality, particularly how much room they offer for passengers and their luggage.

With that in mind, presenter Ollie Marriage quickly starts eliminating rivals, keeping the Enyaq from the VW Group trio, the Ioniq 5 from the Hyundai Motor Group duo, the Polestar 2 from the Volvo Car Group duo, and the Ford Mustang Mach-E. In round two, the Polestar 2 and the Ioniq 5 are eliminated as well, leaving only two models to duke it out with the Tesla Model Y in the end: the Ford Mustang Mach-E and Skoda Enyaq.

Interestingly, the Skoda had first eliminated its platform siblings, the VW ID.4 and Audi Q4 e-tron because it offers a more spacious cabin and roomier trunk for less money.

While Top Gear refrains from picking out a winner of these three electric vehicles and says it is leaving that up to the viewer, it is pretty clear that the Skoda has the victory in the bag.

The price advantage over the Tesla is too big to ignore and the superior practicality over the Ford is undeniable.