Home » Car Reviews » What are the new driving rules in Europe? Major new rules Brits must follow in the EU

What are the new driving rules in Europe? Major new rules Brits must follow in the EU 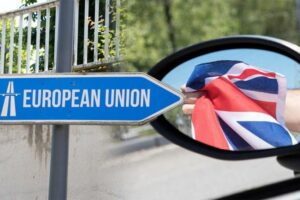 The Foreign, Commonwealth and Development Office (FCDO) has updated its travel advice in line with new driving law changes for Britons hoping to drive in a European Union (EU) country. Drivers caught not following these rules could be stopped by police and issued with a fine.

What are the new driving rules for Britons in the EU?

One of the latest rule changes to come into force since Brexit is the requirement for a UK sticker when driving outside of the UK.”

Drivers will need to display a UK sticker clearly on the rear of their vehicle if their number plate has any of the following:

According to the Gov.UK website: “If your number plate includes the UK identifier with the Union flag (also known as the Union Jack), you do not need a UK sticker.”

However, those heading to Spain, Cyprus of Malta must display a UK sticker no matter what is on their number plate.

The Government website adds: “If you have a GB sticker, cover or remove it.”Although there has been no official explanation from the Government as to why this rule has come into force, the RAC states it could be as a “show of solidarity with Northern Ireland”.

How do I purchase a sticker for driving in the EU?

The new UK stickers can be purchased either in-store or online.

Most Post Offices should stock the new stickers, as well as car specialist shops and garages.

What are the new driving license rules in the EU?

Most UK driving licenses will remain valid while driving in the EU.

Britons driving in the EU should always carry their full driving license with them.

According to the UK Government website: “You do not need an international driving permit (IDP) to visit and drive in the EU, Switzerland, Iceland or Liechtenstein.”

However, there are some exceptions when an International Driving Permit (IDP) may be needed.

Drivers who only have a paper license, as opposed to a photo ID card, or who had their license issued in Gibraltar, Guernsey, Jersey or the Isle of Man may be required to purchase an IDP.

An IDP can be purchased at most Post Offices for a cost of £5.50.

Which countries do the new rules apply to?

The European Union is made up of 28 countries.

However, some driving rules also apply in Norway and Iceland so it is important to double-check the specific regulations for your destination before setting off.