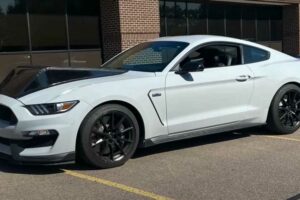 Back in March of this year, a weird Ford Mustang Shelby GT350 test mule was seen testing out on the streets with a massively weird hood bulge. It’s something that no one has ever seen before, and there were many speculations as to what it actually was.

We partook in the bevy of guesses before, but now’s the time to learn what’s really under that odd hood, courtesy of REVan Evan on YouTube with the help of Mark Wilson from Ford.

If you’re one of those who guessed that it’s a 7.3-liter pushrod V8 mill inside that bonnet, you’re correct. That awkward bulge was actually added to give clearance to the upward-facing entry point into the intake manifold.

However, this doesn’t mean that a Godzilla-powered Mustang is on its way. According to Wilson, this Shelby GT350 is simply a testbed for an upcoming manual transmission control pack for the 7.3L pushrod V8 crate engine. It will be available for purchase in the fourth quarter of this year.

Ford has put its foot down in 2020, saying that there wasn’t a plan to shoehorn the pushrod V8 into the Mustang. That still appears to be the case with this revelation.

However, it’s important to note that a prominent member of the Canadian Auto Workers union mentioned that a 6.8-liter version of the pushrod mill would be used in the derivatives of the Mustang and F-150. Ford has never confirmed that statement. But as they say, never say never.