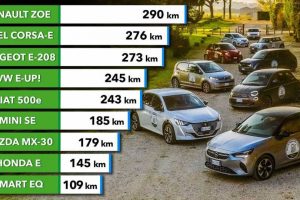 All cars cost under €40,000 and our Italian team drove them until they could be driven no more.

If you’re looking for a small electric car in Europe, the choice of such models has never been as varied as it is today. The offerings are so different that you can even get to pick your favorite not only based on specs and range, but also based on heart’s desire. In other words, there are cars for sensible people who want to get from A to B, as well as ones that are focused on making you look good and providing fun in the process.

On the fun and flashy side of the small electric car spectrum, we have the Honda e, which is also one of the most expensive vehicles of its size. It is very cute, packed with tech and remarkably fun to drive, but the tradeoff is a very low range that renders it useless at anything other than getting your around the city.

At the other end of the scales, we have the much more down-to-earth Renault Zoe, a vehicle that is all about the maximum range it can provide – even though it costs about the same as the Honda, it has about twice the range, so it’s no wonder that it’s one of Europe’s most popular small electric city cars.

Our Italian colleagues at InsideEVs.it tested these cars, along with a slew of others to see just how close they can get tho their manufacturer claimed range. Based on their findings, the Zoe was able to travel for 290 km, the Opel Corsa-E managed 276 km, its French brother, the Peugeot e-208 achieved 273 km, the VW e-Up! came in next with 245 km, followed by the brand new Fiat 500e with 243 km, the Mini Cooper SE (the most fun to drive of them all) with 185 km, the Mazda MX-30 with 179 km, the Honda e with 145 km and the Smart EQ with 109 km.

The result is not surprising given that the Honda e has one of the smaller batteries in the group test, yet one of the highest consumptions out of them all (22 kWh/100km), and it’s also the second heaviest in the test, after the MX-30. This test confirmed what we already knew: if you want to buy a small EV in Europe, just buy a Zoe or either the Corsa-e or e-208.

Check out the video to get the full story, although make sure to enable subtitles if you don’t speak Italian.