Home » Car Reviews » We Need To Remind Ford That Tesla Is An American Automaker, As Is GM

We Need To Remind Ford That Tesla Is An American Automaker, As Is GM 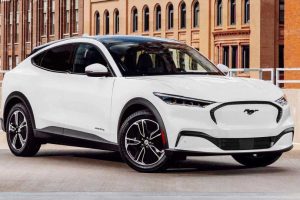 You may remember, back in September, California Governor Gavin Newsom made an official announcement about the state’s plans to ban the sale of new gas-powered vehicles by 2035. Not surprisingly, a Tesla Model 3 was featured during the announcement, as well as the upcoming Ford Mustang Mach-E electric crossover, among other electric cars.

Newsom said he’d like to thank a number of automakers who “get it.” However, he says the initiative is led by Ford and Bill Ford. He calls them a leader in the space, though they haven’t yet dived headfirst into EVs. Thankfully, with the upcoming Mach-E, that’s about to change.

As you can see, Ford CEO Jim Farley tweeted out the part of the speech that mentions Ford’s commitment, and we credit him for that. He should be proud that Ford is joining the initiative. However, he wrote:

“Ford and Cali: Ford is proud to be the only American automaker to stand with California for reduced greenhouse gas emissions.”

Clearly, it seemed Newsom and Farley temporarily forgot about Tesla. Ford is certainly not the only U.S. automaker siding with California. Tesla has been integral in the effort for many years. As an aside, General Motors just reversed course and joined as well, but that wasn’t the case back in September.

Right after tweeting about the September speech, Farley also posted the above tweet. Again, making sure people are aware that Ford is the “only American automaker to stand with California.” However, the Tesla Model 3 is clearly in the picture. Strange that he forgot about Tesla.

Fast forward to the present and now Ford has a billboard up that makes the same false statement. Depending on when the billboard went up, it’s doubly false at this point since both Tesla and General Motors are American automakers standing with California.

It will be interesting to see if Ford takes the billboard down and issues a correction now that another Big Three automaker has joined hands. Perhaps it doesn’t see Tesla as a “major” automaker? The statement and billboard could have said the only “major American automaker,” though that probably would have set some people off even more.

Sadly, many people have been pointing this out on social media for some time. Ford hasn’t changed its statement, and now it has doubled down with the billboard. Perhaps the automaker will reach out to us with a comment.