We Drive Both The Xpeng P7 And P5 Around The Netherlands 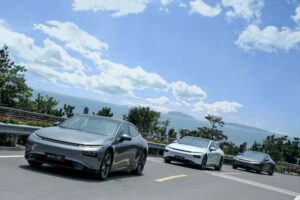 XPENG Motors has come a long way since December of 2018 when customer deliveries of its first vehicle, the G3 compact SUV began. Less than four years later, the Guangzhou-based electric vehicle startup has added two more vehicles to its lineup, the P7 long-range sports sedan, and the P5 family sedan.

The company has also announced its fourth vehicle, the G9, a mid-size SUV that will most likely begin production in Q4 2022. The G9 boasts some exciting features including a 98 kWh battery pack that employs an 800-volt architecture (a first for XPENG). The G9 will be offered in 2WD and AWD configurations and will likely go about 300 miles on a single charge.

Also, because of its 800-volt battery, the G9 will be able to add back as much as 124 miles (200 km) in only five minutes of charging when charging from a DC fast charger that can deliver that much power. To make sure such stations are available, XPENG is installing a network of 480 kW DC fast chargers in China. 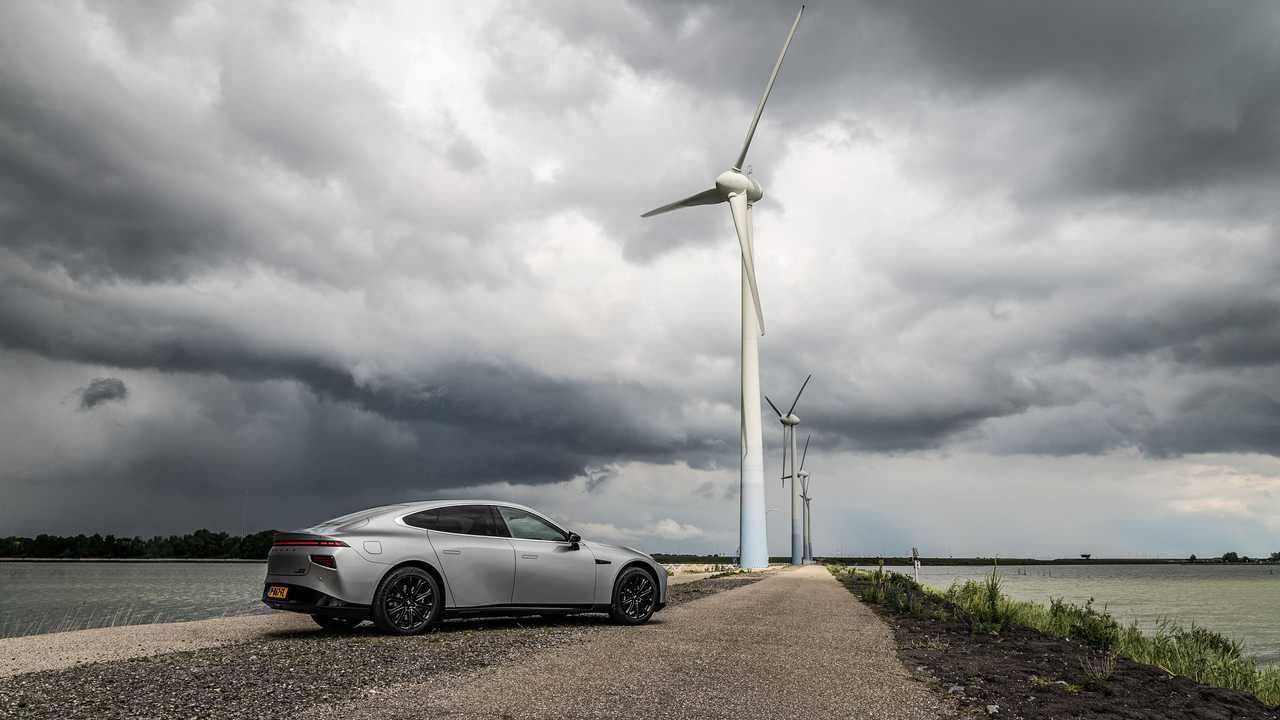 However, the G9 isn’t available to drive just yet, so we accepted XPENG’s invitation to spend a couple of days driving around The Netherlands in the company’s next best offerings, the P7 and P5.

Why The Netherlands? Well, traveling to China these days is still incredibly difficult. The zero-tolerance COVID-19 policy means you still need to quarantine for ten days upon arrival into the country, which is an immediate show stopper. However, even if we could travel to China to drive XPENG’s vehicles, doing it in The Netherlands still makes sense.

That’s because XPENG has made it clear they plan to be a global brand. The company has been shipping vehicles to Norway since 2020 and has added XPeng Experience Stores in Sweden, Denmark, and The Netherlands. We even visited the XPENG Experience Store at the Hague in The Netherlands during the driving event; more on that later.

InsideEVs was the first western news outlet to drive the P7 on North American soil, so going into this driving event we already had some experience behind the wheel of the P7. The P7 employs a bespoke skateboard platform that Xpeng co-developed with Porsche. XPENG calls it the Smart Electric Platform Architecture (SEPA)

It has a front double wishbone and rear multi-link suspension and an 80 kWh battery pack with the cells sourced from CATL. It comes standard with Brembo brakes and 19-inch wheels wearing 245/45/R19 Michelin Pilot Sport 4 rubber.

We drove the P7 all-wheel-drive high-performance version, which has 424 hp and 483 lb-ft of torque. Xpeng also offers a rear-wheel-drive version of the P7 which pumps out 263 hp and has 288 lb-ft of torque. The AWD performance P7 has a WLTP range rating of 470 km (292 miles) which would likely translate to about 260 miles (418 km) on the EPA range-rating scale.

XPENG claims the P7 Performance can accelerate from a standstill to 60 mph in 4.4 seconds, quite slower than its chief all-electric rival, the Tesla Model 3 Performance, which accomplishes the same feat in 3.1 seconds. However, the mid-4 second range from 0-60 is still very respectable, and quite quicker than most cars that are available today. 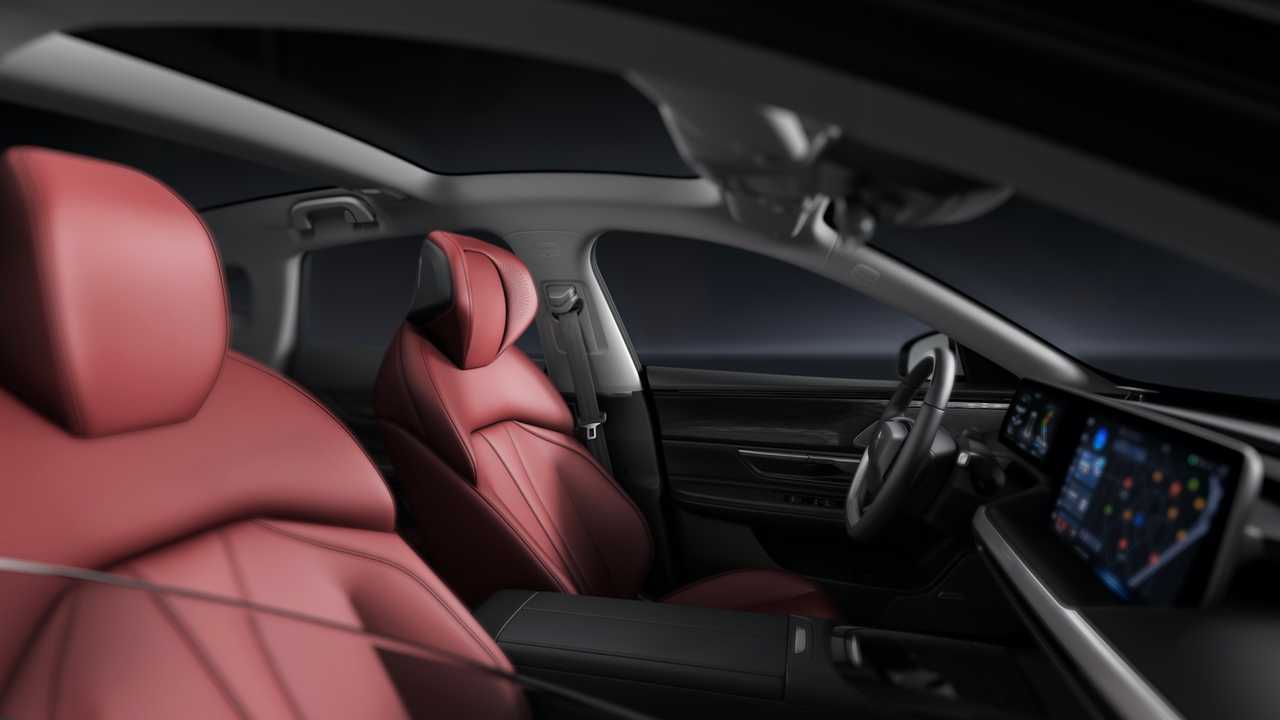 On the positive side, it doesn’t take long to notice the Model 3’s ride harshness is absent in the P7. The suspension isn’t tuned for optimal performance, as ride comfort is prioritized. The P7 glides along the highway and eats up minor potholes and other road irregularities nicely. It’s most likely not nearly as good of a track car as a Model 3 Performance, but it’s definitely smoother on public roads and more comfortable on long drives.

On the inside, the P7 definitely has a modern, minimalistic design. There’s a 15″ (OK it’s really only 14.96″) touchscreen display that’s extremely crisp and clear as well as a 10.25″ driver’s display. There are no physical buttons except on the steering wheel.

Like the Tesla Model 3, practically everything, including climate control is done from the center screen. To us, the system didn’t seem as intuitive as it could be, but it was our first time using it. When we drove the P7 (off public roads) in the US, the vehicle had Chinese software, and we didn’t understand anything.

The seats were very comfortable and the driver’s seat has speakers in the headrest. While the sound was great, the wide headrests limited our view when looking to the side a bit, and took some getting used to.

There are two settings for brake regeneration. In normal mode, it was noticeable, but not much, and felt quite mild. However, switch the setting to high and the regen kicks it up a few notches and offers near one-pedal driving. Transitioning from accelerating to regeneration was smooth, better than how the system worked when we first drove the P7, so apparently, XPeng has fine-tuned it since then. 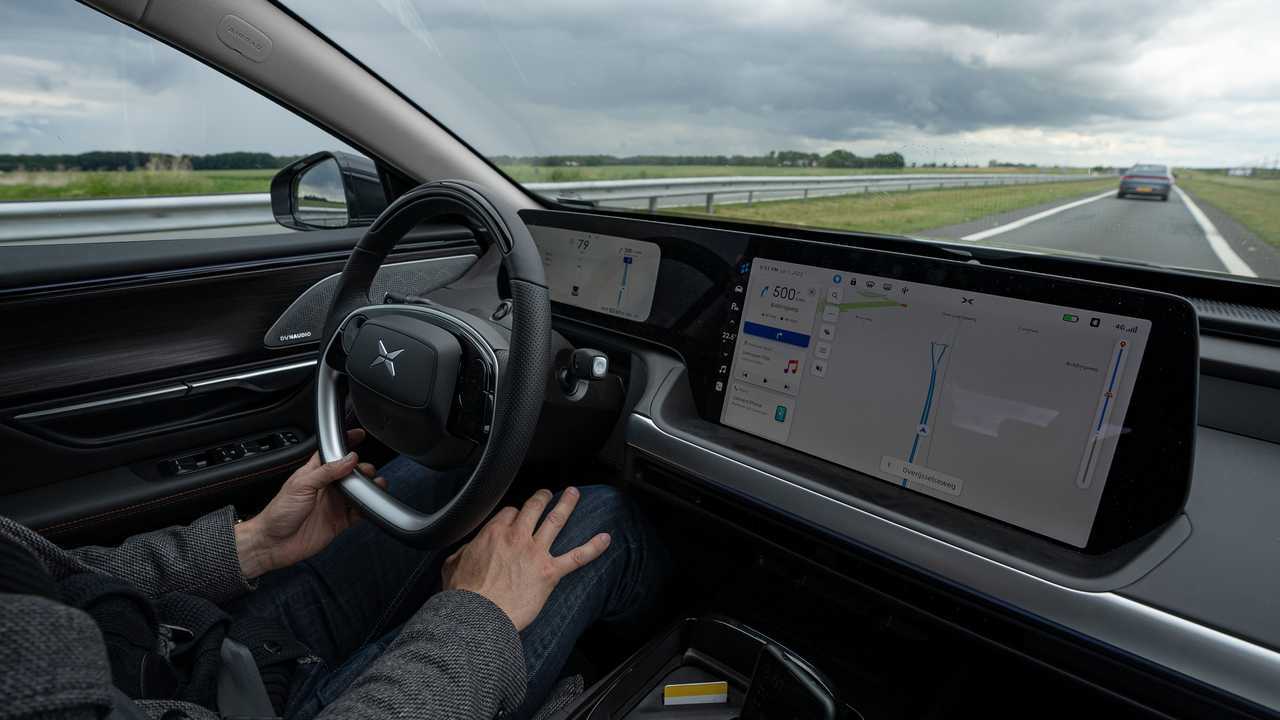 XPENG’s suite of advanced driver’s assist systems is called XPILOT, and there are multiple versions of the system, depending on model and when it was sold. The P7 we drove had XPILOT 2.5 (the G9 will launch later this year with XPILOT 4.0, the company’s latest version). The system doesn’t work as well in Europe as it does in China – yet, at least.  XPILOT utilizes HD millimeter-wave radar and ultrasonic wave sensors and worked pretty well, but we could tell it’s still a work in progress adapting it for Europe roads.

One particularly annoying feature was the lane departure warning (LDW) system. While just using the adaptive cruise control and not the Land Centering Control (LCC), the system constantly issues an audible warning if you’re not in the center of the lane. You don’t even have to have a tire touch the lines and it beeps incessantly. I had to disable the feature because I couldn’t drive for more than 5 minutes without it warning me to move to the center of the lane. And I wasn’t the only person to find it bothersome, all of the other journalists on the media drive event were saying the same thing.

On the plus side, XPENG’s self parking feature is one of the best available from any brand in the industry. You can activate it with voice command or the center display and drive slowly by the parking spaces either on street or in a parking lot. The vehicle detects the available spaces and once you select the space you want the car does the rest. We tried it out 4 or 5 times in different types and angles of parking spaces and each time it performed the task perfectly.

Gallery: Xpeng P5 In The Netherlands

We didn’t have nearly as much time behind the wheel of a P5 as we did the P7, but we did experience it enough to come away with some initial thoughts.

First off, we need to point out that XPENG has postponed importing the P5 into Europe indefinitely. The company began accepting reservations on the P5 from customers in Norway, Denmark, Sweden, and The Netherlands earlier in the year. However, according to XPENG, the production strain caused by the global supply shortages has forced it to stop taking reservations and place European P5 deliveries on hold until further notice.

Driving the P5 around rural areas of The Netherlands was, well, calming. The P5 is very quiet and has an even softer ride than the P7. It should, as it’s not a sports sedan like the P7. The spacious cabin felt even larger with the panoramic glass roof option that we had 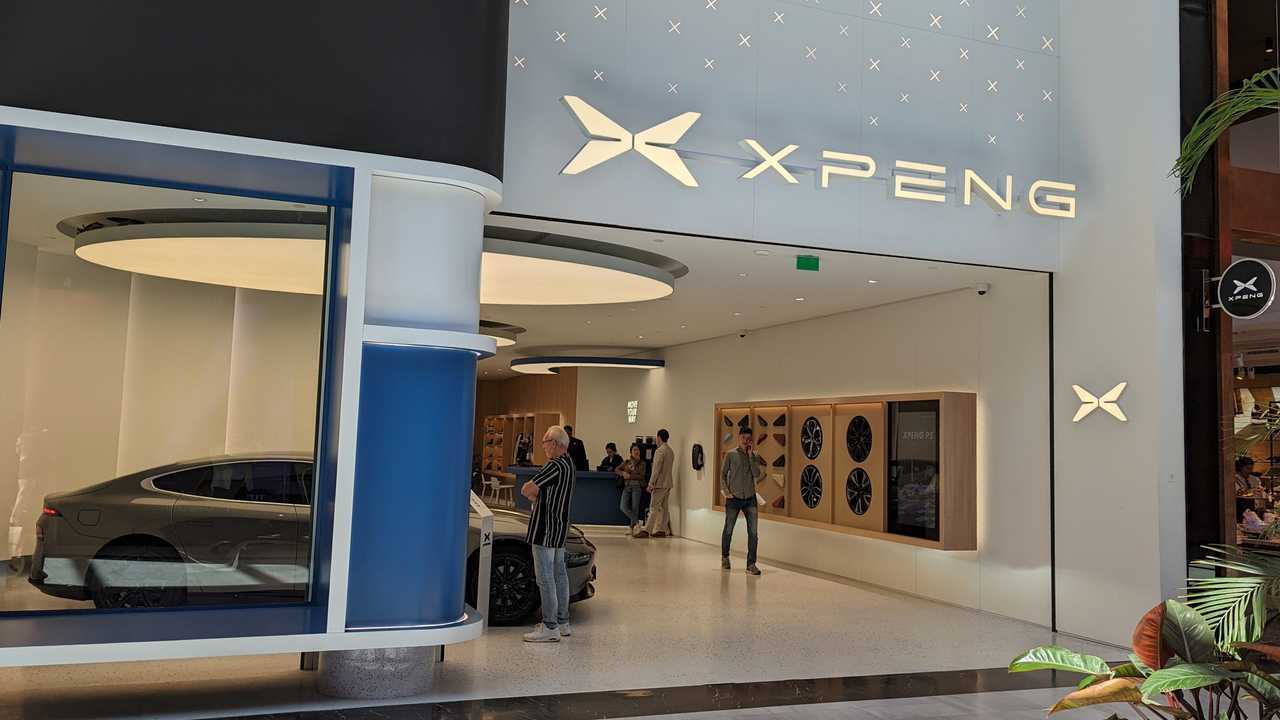 We also had the opportunity to visit the XPENG Experience Store at the Hague in The Netherlands. In addition to a P5 and a P7, the store had one of the rare P7 Wing models which is a P7 performance model with custom butterfly front doors.

XPENG is following Tesla’s model and selling its vehicles direct. However, customers can also come to one of the XPENG Experience Stores and order the vehicle there. The interesting thing about our visit is that the XPENG representatives at the store had arranged for us to have a roundtable discussion after driving the vehicles so that they can get our feedback.

They peppered us with questions about what we liked and didn’t like as well as what changes we would like to see made. We’ve participated in a lot of media drives over the years and it’s not unusual for company representatives to ask for some feedback, but this was taken to the next level. It seems that XPENG is still trying to figure out exactly what western buyers want so they can adjust the vehicles to suit different needs. (We definitely mentioned the over aggressive lane departure warning!) 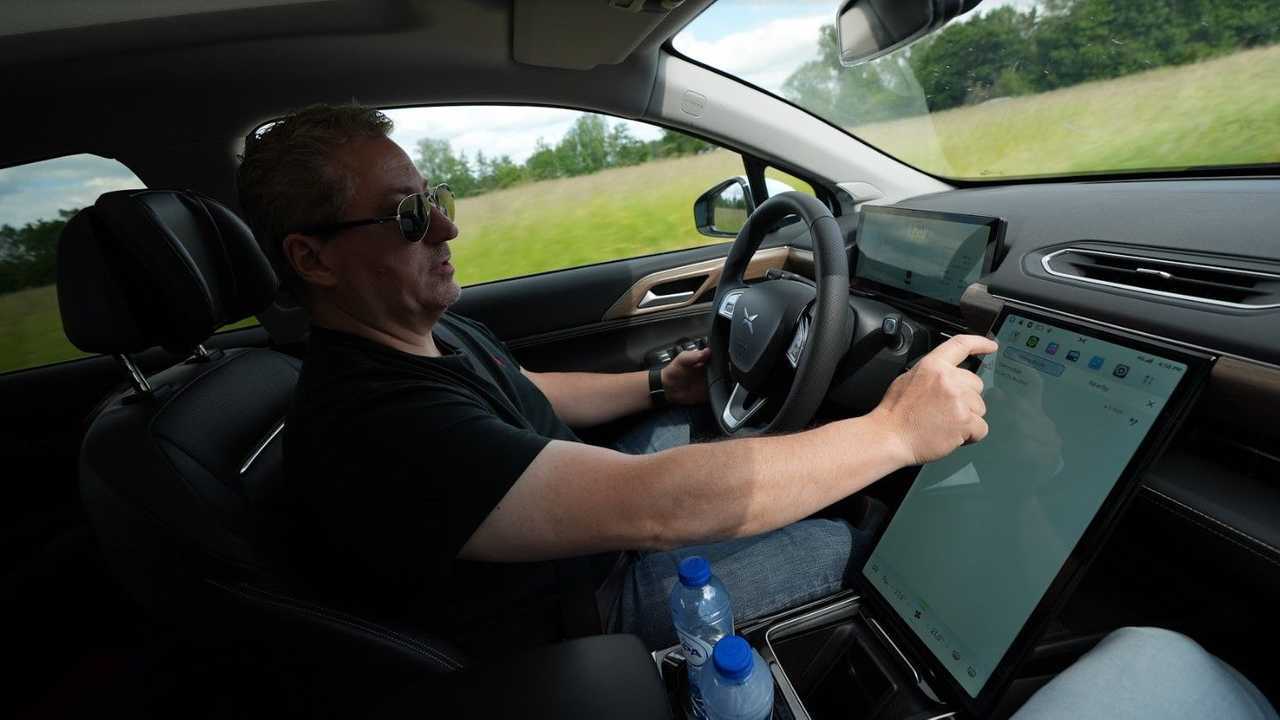 We also found out that they aren’t only asking journalists opinion’s. When potential customers take an XPENG vehicle for a test drive from one the XPENG Experience Store, they too are asked to comment on what they liked and didn’t like about the driving experience. That’s a good approach in our opinion. XPENG clearly has it’s sights on being a global automaker, and it’s important to understand that different markets have different wants and needs.

After a couple of days driving the P7 and P5, and hanging out at an XPENG Experience Store, we’re more convinced than ever that XPENG is on the right track. With the launch of the G9 later this year, XPENG will have launched four completely different vehicles in a span of four years; a compact SUV, a long-range sports sedan, a family sedan and a mid-sized SUV.

The company recently delivered its 200,000 vehicle and has three manufacturing facilities (only one is currently open with two under construction) and is seeing monthly sales steadly increase even with a global pandemic and the current supply chain problems. Yes, XPENG appears to be on the right track, but will the train get derailed? Time will tell, but we don’t think so.