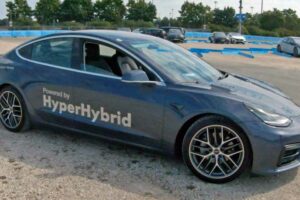 One of the highlights of IAA Mobility 2021 was talking to people from Obrist about their technology, their goal and, of course, their Teslas whathich run on gasoline. Obrist is a company based in Lustenau, Austria and its goal is to sell the patent for its hybrid tech to major manufacturers.

It started around 20 years ago and one of its latest innovations is a series hybrid system that it says achieves a real world fuel consumption figure of 2 l/100km – its rating, based on the older NEDC test cycle, is actually around 1 l/100km, according to Thorsten Rixmann, Obrist’s Director of Marketing & Communications, although the real consumption figure will surely vary depending on how it’s driven and it probably is higher than that.

Thorsten was the one who explained everything to me (the entire interview is in the video above), from the Obrist group’s history to the reasoning behind their decision to develop their proprietary hybrid system. And before we get into why they chose a Tesla Model 3 as a testbed, it’s worth running through how what the company calls its Hyper Hybrid works.

So under the hood of the Model 3, where the frunk used to be, Obrist has installed a small 1-liter two-cylinder gasoline generator that makes up to 4o kW when run on gasoline or 45 kW when run on methanol. They call the little two-pot a ZVG (short for Zero Vibration Generator) because it is said to be very smooth even when it starts up and its revs increase – you can’t actually see it when you lift the hood, because it is actually placed further back than where the frunk is; what is most visible is the air-con system.

Electricity is stored in a 17.3 kWh battery pack that is not made from Tesla cells and Obrist says it uses its own lithium-ion battery cell technology. It is considerably lighter than any standard Tesla battery pack, weighing in at just 98 kg (216 pounds).

The motor that drives the rear wheels makes 100 kW (136 horsepower), but they do plan on offering higher-performance versions of it in the future – in the vehicle I drove, it sipped fuel from a 30 liter tank. And even though the entire vehicle is quite a bit lighter than a standard Model 3, that’s not really enough power to provide performance comparable to an actual Tesla.

This brings me to the reason behind Obrist choosing a Tesla to experiment with its hybrid. Thorsten told me very simply that Tesla was chosen because it is the most advanced EV on the market and that’s what they were looking for – previous prototypes were built around a Fisker Karma, as well as a Chinese sedan.

If you want to see how the interview unfolded and how the test drive of the Model 3-based Hyper Hybrid went, check out the video. There are still several unanswered questions regarding this tech, its feasibility in the face of the imminent ICE vehicle ban that is going to be enforced in Europe in around a decade’s time, stay tuned as we will be publishing more articles about this topic soon.